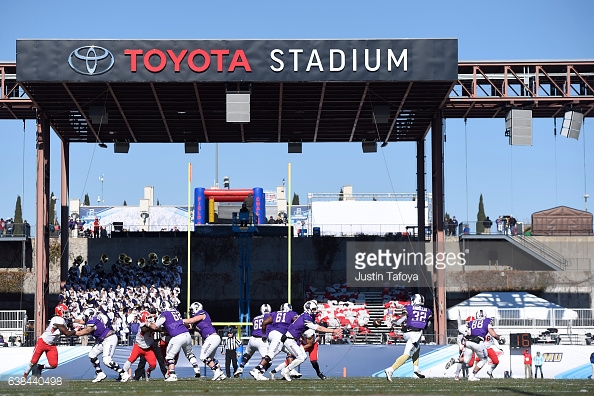 More bowl games in Big 12 country! Frisco’s Toyota Stadium is expected to take over what used to be the Miami Beach Bowl, according to the city.

The Miami Beach Bowl has only been going on for the past 3 seasons, where it was held at Marlins Park.

Josh Dill, the director of sports and events for the Frisco convention and visitors bureau, said the city of Frisco and ESPN has been having conversations about the move for quite some time.

If you recall, the Miami Beach bowl has one of the most memorable off-field moments in recent bowl game history. There was this fight following the Memphis-BYU game in the inaugural season in December of 2014.

Yikes. Hopefully none of those memories in Frisco.

Toyota Stadium is expected to host the bowl game for at least the next three years, and the dates of the bowl games are not yet known.

ESPN reports that the bowl will continue to have at least one AAC team, and in 2017 and 2019 games will feature a Sun Belt opponent and a Mid-American Conference team in 2018.

AAC commisioner Mike Aresco said in a statement, “The transfer makes sense on many levels. We are excited to enhance our overall relationship with ESPN and to continue our affiliation with the bowl.”

Football is nothing new to Toyota Stadium. While it’s typically the home of the soccer team FC Dallas, it also hosts the Football Championship Subdivision (FCS) National Championship game and has been the home to several high school football games.

This now gives the Dallas-Fort Worth area a total of four bowl games. The others are the Cotton Bowl, Heart of Dallas Bowl and the Armed Forces Bowl.