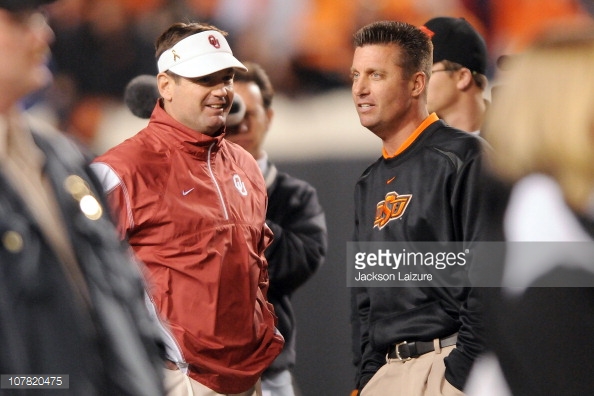 A new law signed by Oklahoma governor Mary Fallin could be used by universities to sue athletic boosters whose actions lead to NCAA sanctions, according to The Oklahoman.

The new law was signed on Thursday and goes into effect November 1st. It lets universities sue sports boosters and agents who expose the school to sanctions.

The example used by The Oklahoman:

For example, if a booster gives cash to a student athlete in violation of NCAA rules and the NCAA fines the university, a court could order the booster to pay damages to the school.

The Oklahoman reached out to OU boosters who were split on this new law. One told the paper “it had a chilling effect on me,” while a second said it “doesn’t scare me at all” because boosters who break NCAA rules are “a black eye” for whole program.

Frankly, I don’t know how you could be against this, unless you one of the Oklahoma State or Oklahoma boosters who knowingly breaks the law.

I’d say that this should be instituted by other states, but let’s be honest: if this ever went through in places like Texas, Alabama, Georgia and others, their college football programs might go out of business!

This is an ethical move by the state of Oklahoma that will help Bob Stoops and Mike Gundy better police what exactly is going on in their programs and with their respective recruits. It should also deter boosters from trying to pull illegal maneuvers that put their programs at risk, but often involved little risk for those boosters actually breaking the law.

Oklahoma State and Oklahoma boosters will now need to play their game much more carefully.