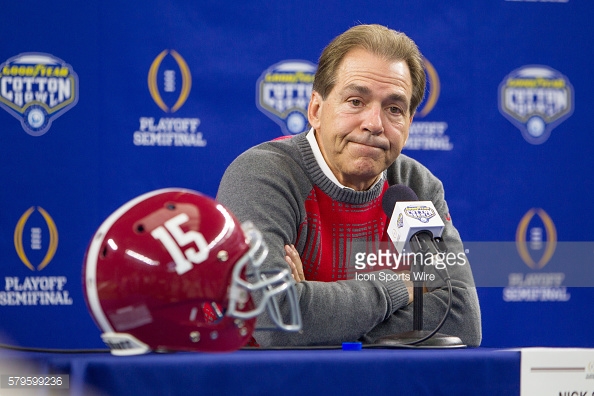 Build that wall! Build that wall! The SEC’s attack to try and overtake the state of Texas continues. SEC commissioner Greg Sankey said on Wednesday he has interest in moving SEC media days to other cities, including potential landing spots in Texas.

“It’s been on my mind. I would not foreclose that opportunity to move around. We have an 11-state footprint so adapting to that is one that we think about.”

The SEC commissioner then went on to take a dig at the Big 12, saying about Texas, “This is SEC Country. I think Texas A&M coined the billboards.”

Media days is quickly becoming more and more of an event that resembles media day during Super Bowl week. It’s not longer just about what happens on the field, but there are plenty of quirky off-the-field storylines that seem to pop up as well.

Media days is quickly becoming more and more of an event that resembles media day during Super Bowl week. It’s not longer just about what happens on the field, but there are plenty of quirky off-the-field storylines that seem to pop up as well.

So the SEC is going to try to take their event out of Hoover, Alabama and potentially begin rotating it around cities across the SEC. I get it, and frankly, it’s a smart and forward-thinking idea.

The Big 12 needs to maintain its grip on the state by maintaining its Big 12 media days in Dallas, while also getting more hype and attention to itself.

How does one do that?

Well the easiest answer is to have great teams and “big name” head coaches with great personalities. Then the storylines drive themselves.

But as long as the SEC has Nick Saban and the Big Ten has Urban Meyer and Jim Harbaugh, the Big 12, ACC and Pac-12 will all be playing for third place.

Now Tom Herman has that kind of personality that’s quirky enough to become the Jim Harbaugh of the Big 12. But he needs on-field success to follow as well.

However, the other ways that the Big 12 can take a step forward and start making media days an event is by doing things such as welcoming back former head coaches and players. Think of Super Bowl media day or radio row: you have ex-players and coaches patrolling and pitching products to a slew of radio stations and podcasters that are covering the event. Granted you already have stations down there and sometimes former big names show up, but make a point of it and promote it.

Think Barry Switzer would be down to head DFW and talk everyone’s ear off and get more publicity? Mack Brown? It’d be a great event to generate even more headlines for the conference.

There’s nothing the Big 12 can do to stop the SEC from holding its media days in the Big 12’s backyard. But the Big 12 needs to respond and think about unique spins to create more hype around its event.

If they don’t think will just be another opportunity for the SEC to continue its increasing dominance recruiting in Texas.

Another Bowl Game is coming to Dallas-Fort Worth
American Athletic Conference is trolling the Big 12, all in on ‘Power 6’
To Top