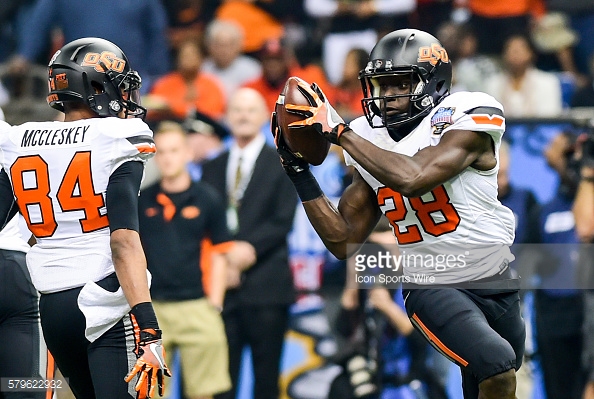 December 27, 2016 is a date that Oklahoma State Cowboys fans should remember for a long time to come. On that day, while getting ready to prepare for an Alamo Bowl showdown against Colorado, quarterback Mason Rudolph and wide receiver James Washington announced that they would both return in 2017 for their senior seasons. While Cowboy fans were excited for their superstars to come back, I am sure that there were just as many people saying “Oh shi#%”, worried about their team that had to play them once again come fall. Recently the football program has launched a Heisman campaign for Mason Rudolph for the upcoming season. Let me tell you folks who are on the fence about the name Rudolph when talking about the Heisman trophy: while every college football fan in America may know the name James Washington when talking about the Oklahoma State wide receivers, there is more than meets the eye with this group. Just take a look at who Rudolph will be throwing the ball to next season and you will quickly see why this idea of “Rudolph for Heisman” isn’t so crazy after all.

Oklahoma State has been absolutely spoiled when it comes to wide receivers. It started with Dez Bryant and Justin Blackmon and now, James Washington. The two time All-Big 12 selection has been torching defenses over the top for the past three seasons and looks set to have a monster senior year. His 26 career touchdown catches leads all active players in the FBS heading into 2017. He also leads all active Power 5 conference wide outs with 2,923 receiving yards. Washington has the ability to hit the home run play any time he touches the football and runs like a running back with the ball in his hands. Washington is widely considered to be the best wide receiver in the entire country and it is easy to see why.

Lacy is a big bodied receiver who is a reliable target with solid hands. He had his breakout year last season with 31 grabs for 489 yards and 3 scores. While these stats may not jump off the page for you, this is a guy that every school would love to have on their roster. He can catch, he can block and most importantly, he isn’t afraid to get his hands dirty helping out the team any way possible. What stands out about Lacy is his toughness and he is the most physical receiver on the team. Lacy brings a linebacker mentality at a position known for its diva like attitude but you are not going to find that with the rising senior.

Back in 2015, Marcell Ateman looked like he was poised to have a HUGE year in 2016. Unfortunately for Ateman, he suffered a devastating foot injury that held him out for the entire 2016 season. In his 2015 campaign he caught 45 balls for 767 yards along with 5 scores. Ateman’s averaged a whopping 16.7 yards per catch that season! There is no doubt in my mind that if he wasn’t hurt last season that he would have had a thousand yard season. Now in his fifth year, Ateman is back and stronger than ever.

Do you know that feeling when a fly is buzzing around your face? You’re swatting at it and just wishing that it would go away. Well that’s exactly what Big 12 defenses felt like when trying to stop Jalen McCleskey. McClesky had his coming out party last season with 73 grabs for 812 yards and hit pay dirt 7 times. He is that speedy slot receiver that is extremely hard to contain in space. This is a guy who stepped up BIG last season when Ateman went down with a foot injury. The 5’10” junior is a very reliable target who continues to get better each and every game.

I saved the wild card of the group for last in Tyron Johnson. He was rated as a 5-star prospect (according to 247) coming out of high school in 2015. Then Johnson transferred from LSU last year and sat out the entire 2016 season due to NCAA transfer rules. This is a guy that I am really excited to see play because he has been the talk of spring ball in Stillwater. Word out of camp is that he is a human highlight film because he does something every day to make your jaw drop. Many say that Johnson could be the best receiver on the roster with his talent, but until he puts on the uniform, we won’t know just yet. Regardless, it is very possible that Oklahoma State has found their version of an Odell Beckham Jr.-type receiver.

As you can see, the Oklahoma State wide receivers are a loaded bunch. These are five guys that could start for ANY Big 12 team. By the end of the 2017, we could be sitting back in awe of how good this bunch really was. Out of these five guys, three of them could be top 10 players in the country at their position. There is no doubt in my mind that this is the best wide receiver core in the entire nation. In years to come we could be looking at this receiver group to possibly be one of the best of all-time in college football history. The only real problem they will have is only having one football to share. But that’s not all that bad a problem to have!