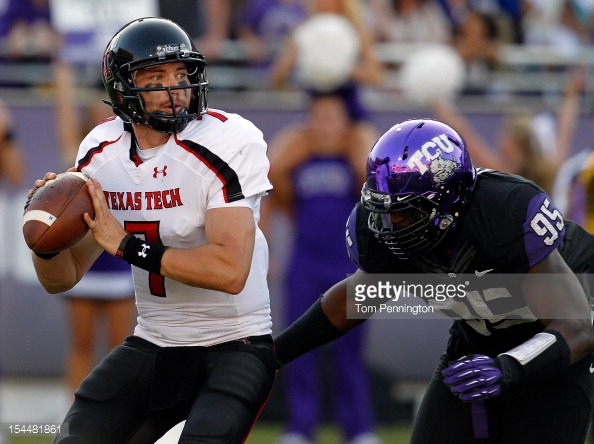 After going undrafted this week, former Big 12 Freshman of the Year and TCU defensive end DeVonte’ Fields tweeted he wishes he never went to TCU. This tweet was taken down shortly afterwards.

Fields’ career got off to a promising start in Fort Worth in 2012 leading TCU with 18.5 tackles for loss and 10 sacks that season. He was named the Big 12 Defensive Freshman of the Year, but then in 2013, Fields only played in three games due to injury and suspension.

Things began unraveling in 2014 when he was kicked off the team because of a domestic violence charge. The charges were dismissed after he agreed to attend an anger-management course. Also, before being bounced, Fields was robbed and shot near his apartment in January of the same year.

DeVonte’ Fields took his career to Trinity Valley Community College in 2014. Then, he transferred to Louisville in 2015, where he finished his eligibility and ultimately went undrafted.

During his first year at Louisville, Fields started all 13 games, recording 64 tackles and 11 sacks. He was an honorable mention All-ACC pick with a nation-leading 22.5 tackles for loss. His numbers dipped in 2016 to 45 tackles and 6 sacks.

Throughout the draft process Fields’ effort and “love for the game” often came into question. Also, many scouts said he was undersized and has issues against bigger and more physical players.

Unfortunately, Fields is blaming the situation and TCU, rather than himself for the mistakes that he made during his time in Fort Worth. Fields is a really good athlete and was an All-American in high school, but his issues have been self-inflicted wounds.

I hope Fields find a home in the NFL and becomes that next undrafted player who ends up an an NFL multimillionaire. But based on his since-removed tweet, I’m still not sure he really “gets it.”