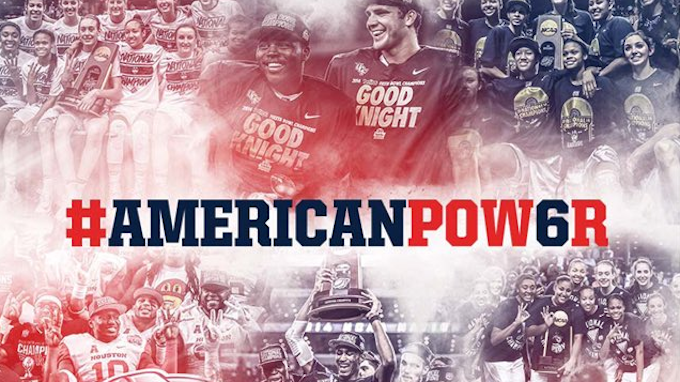 The American Athletic Conference, also known as the AAC, is all in on its “Power 6” campaign.

The conference just had more players drafted (15) than the Big 12 (14) and figures this is as good a time as any to explain why it’s worthy of being considered one of the Power Conferences in college athletics.

Along with the new Conference Strategic Plan comes the hashtag, #AMERICANPOW6R.

As part of the AAC’s statement:

“The American Athletic Conference has enjoyed great success in many areas during its first four years of existence,” said Susan Herbst, University of Connecticut President and Chair of the Board of Directors. “The league’s new Strategic Plan will help guide our Conference in its next phase of development. College athletics is always in a pattern of change and it is important for The American to have a bold and aggressive plan as we look to the league’s future.”

The AAC sees a chance to jump at the Big 12’s perceived public weakness and create themselves as the equivalent, if not better than, the Big 12.

Every Big 12 fan who is being honest with themselves knows that Texas and Oklahoma are the driving forces behind the health and relevancy of the conference. No matter how much the Longhorns struggle on the football field, they carry a ton of weight, and any other Power 5 conference would love to bring them on board.

But I give the AAC credit for trying to capitalize on this right now. Ultimately, I don’t think it will go anywhere, but some folks in the conference are giving it all they’ve got.

The new strategic plan from the @American_Conf.#AMERICANPOW6R

Here are the targets for AAC Football that the league outlined in its #AmericanPow6r Strategy: pic.twitter.com/iWwQe8ZmvR

The SEC wants to move its media days to Texas
Bob Bowlsby says players are ‘college athletes’, not amateurs or pros
To Top