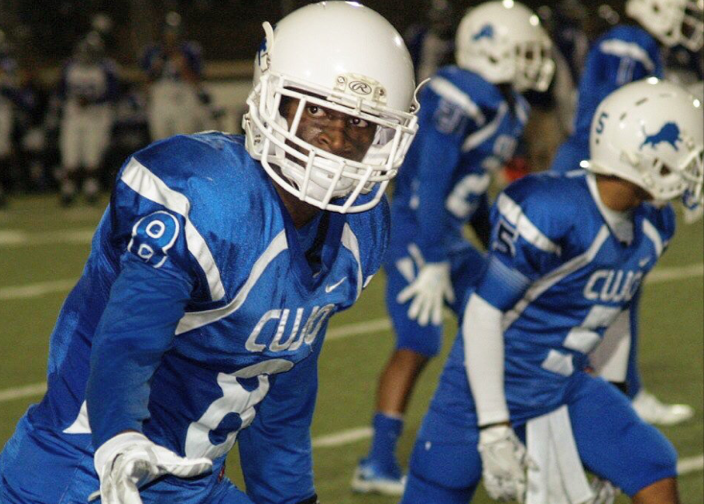 Tyler, Texas may be a good 4+ hour drive to Austin, but incoming 4-star wide receiver Damion Miller knows the 40 Acres will feel like home.

That was one of the biggest reasons he stayed committed to the Longhorns after Charlie Strong was fired following last season. Miller told Heartland College Sports, “staying in the dorms and spending three or four years there, I honestly knew I’d feel really safe, and it even felt like a safe haven to me on my visit. I truly believed I would have a better shot there to play at the next level and it’d make me a better person by going to Texas.”

Luckily, the guy who replaced Strong, Tom Herman, was a nice added bonus for Miller, who the wide receiver knew from his high school days as well. “The coaching change didn’t affect me at all because Coach Herman wanted me at Houston too. With all the success he had with the Cougars, when he was hired I felt like we had an even better chance of getting back on track. I was not going to go anywhere else and was solid on Texas from Day 1,” Miller insisted.

The 6’1” wide receiver is coming off back-to-back 900-yard receiving seasons with the John Tyler Lions. The high school has produced recent Big 12 and NFL products such as Kendall Hunter and Aaron Ross. But it’s one former John Tyler, Big 12 (or SWC) and NFL star that really made an impact on Miller from a young age.

Damion Miller first met 1977 Heisman Trophy winner Earl Campbell when he was 4 years old. Miller’s sister’s close friend’s grandpa is Campbell. Miller always looked up to the 1979 NFL MVP and even wrote an essay about Campbell in middle school. “I showed my sister the report, who showed it to her friend, and then her friend showed him [Campbell], and he was down here in Tyler,” Miller said, adding, “I then went to meet him and I saw his trophies and everything. It was exciting seeing and meeting one of the best running backs to ever play the game. It was inspiring.”

So, what advice did Miller get from Campbell?

“He told me to never give up and anything.”

Damion Miller will head to Austin this summer and his goals will be right out of the Earl Campbell playbook. He told Heartland College Sports, “I want to get my degree and become one of the greatest wide receivers to ever play at Texas and continue my career at the next level.”

But Miller does have a plan and a goal once his playing days are over, whenever that might be. He hopes to study engineering and would like to get into the field when football eventually comes to an end.