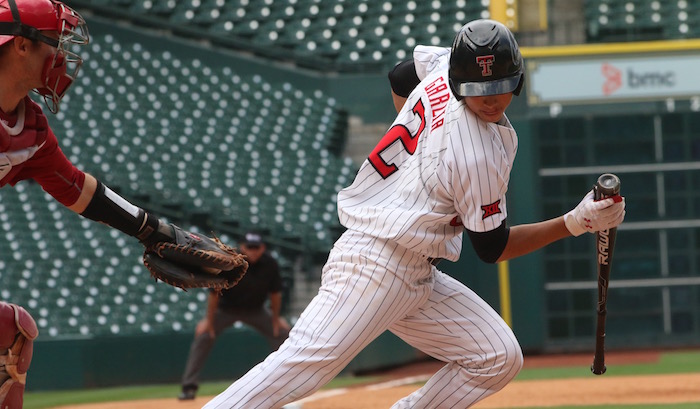 The picture is clearing up. All of the movement in our Big 12 baseball power rankings this week came in the heart of the lineup. Thanks to Texas being swept at the hands of TCU, two teams were able to move up. Heck, one of those teams didn’t even play. However, that same team did something way more valuable than securing victories.

Our top two remain the same in the Big 12 baseball power rankings, and the polls agree with us. All five polls, including RPI, have Texas Tech above TCU. We have more reasons than just that though. It’s clear Texas Tech has proven to be the better, more consistent team throughout the year. In fact, while TCU is a solid College World Series-caliber team, I wouldn’t consider them to be a National Championship contender after looking through their season results. Their pitching just isn’t deep enough. One loss in Omaha for TCU, and they’ll literally be trying to homer their way to the title game. At that point, defenses are just too good for an offense-only team. There are definitely solid pitchers on the Horned Frogs, but not enough. The Horned Frogs are currently sixth in team pitching. In conference play, their staff owns a 4.54 ERA. TCU is clearly the most talented team in this conference, but Texas Tech has been the more consistent team. The nation has noticed the same thing.

Also, there was a chance that the Big 12 could have placed eight teams into a regional. That’s likely gone now thanks to Oklahoma State dropping a series against Lamar this weekend. The Cardinals moved up over 20 spots in the RPI rankings. Meanwhile, the Cowboys were just outside the regional projections one week ago. Now, they’re definitely not close to being selected. There’s still hope for them though. As for a seventh team? Kansas is trending upwards. They’re now five games over .500 and host rival Kansas State this weekend, who by the way, is in the cellar. A sweep for the Jayhawks would give them a serious push towards a regional berth.

Who played? Who did not? Who is a potential regional host? Who is on the bubble? Find out in our weekly Heartland College Sports Big 12 baseball power rankings below.

At this moment, it’s clear who has done the most in the Big 12 Conference. Texas Tech may not be ahead of TCU in the standings, but there is a reason they are in front of the Horned Frogs in the polls. Aside from the fact Tech took the season series from TCU and run-ruled them 21-3 in a single game on a travel day, these Red Raiders have also taken care of business in places TCU hasn’t.

First off, Tech scored a series victory in West Virginia. TCU was nearly swept in Morgantown. If it hadn’t been for a pair of comebacks, the Horned Frogs would not have even seemed competitive. It’s not necessarily TCU’s fault they hosted Texas, but Tech also one-ups TCU in how they handled Texas. No extra innings were needed, and the Red Raiders swept Texas on the road.

The reason Tech is behind TCU is because the Red Raiders have had some letdowns. They were clearly looking ahead to their series against TCU when Oklahoma State flew in to Lubbock and stole a series. That’s a team TCU swept, albeit with one of the ugliest displays of defense I’ve ever seen. Tech also dropped one game on the road against Kansas State, a place where TCU recorded a sweep, but needed extra innings in two games to do so. Case in point, Tech has outdone TCU so far, and thus they are ahead of TCU. If you disagree with me, then go argue with Baseball America and D1Baseball.com. I’m not the only one here who thinks the team currently in second place is the best team in the Big 12 Conference.

Tech will take this week off for finals before completing their regular season against Kansas.

B6 – The leadoff man gets aboard, but Harp, Bergie & OG combine for the strike ’em out, throw ’em out to erase him! #WreckEm pic.twitter.com/1wm3YB1rbz

It was an amazing Sunday for TCU. Head coach Jim Schlossnagle secured his 600th victory, and it came on Senior Day as TCU completed the sweep of a good Texas team. They don’t need an RPI boost, but if TCU wants a higher national seed, they can certainly help their cause in the coming weeks. First, they travel to Norman to face a tough Oklahoma team. TCU can secure a share of the Big 12 crown with one victory, and win the outright championship with a series win.

After that, they finish up the season with a midweek game against UT Arlington and a road series against Cal. Although, the Horned Frogs are losing some great seniors, they’re youngsters are even better. That’s what is so scary. Luken Baker, Durbin Feltman and Austen Wade are all sophomores. They are guaranteed to return. Slugging catcher Evan Skoug also has one more year of eligibility if he doesn’t sign with whoever drafts him in the First-Year Player Draft this June.

It was finals week for Baylor students, so the Bears were provided an off-week courtesy of Big 12 scheduling. The team didn’t take a break from the field though. Actually, they did something more important this week than all eight other teams combined. Baylor gave back to the community by hosting 200 children in the Little League Challenger Division in partnership with Shriners Hospitals for Children. For those who don’t know about the Challenger Division within Little League Baseball, you can click on this link for more information.

A great day at the field with Shriners Hospital for Children. @shrinershosp #Baylor #BreakFromFinals #NeverQuit pic.twitter.com/dum9izehHy

Also, head coach Steve Rodriguez just seems like an amazing guy. I honestly believe he’d rather be doing charity work than winning ball games. If you don’t remember the Shriners Hospitals College Classic back in March, Rodriguez had an amazing interview with one of the children who benefits from Shriners Hospitals. Baylor baseball may not be the best team on the field, but they are certainly putting in some stellar work off the field.

However, the fun is over. Baylor gets back to work with five games this week, including a three-game road series against Oklahoma State this weekend.

The Sooners are still in the title hunt, but it’s an uphill battle with a steep incline. Luckily, they start that climb in familiar territory. TCU has to go to Norman, and the Horned Frogs haven’t been very lucky on the road here lately. Both times they’ve dropped a series, it came on the road. First, they lost in Morgantown. The second series TCU lost featured an embarrassing 21-3 run-rule defeat at the hands of Texas Tech in Lubbock. Lose one game, and the Sooners title hopes are over. However, Oklahoma has boosted itself into the regional hosting conversation. They can seriously help those odds with a series victory this weekend. Winning two series on the road consecutively has pretty much cancelled out a terrible April. Now, here’s your chance to completely forget about that month.

Once again, TCU was on the ropes. Texas had TCU on the ropes, and the Horned Frogs survived. The Longhorns just can’t seem to win on the road. This weekend’s sweep plummeted Texas’ road record to 6-11. Let’s reiterate that Texas is a solid lock for a regional. They will not be hosting, but they will be selected. I don’t see them doing much more than that though. If you can’t win on the road, then you are guaranteed an early exit from the field of 64.

Texas will take finals this week before ending its season with four games at home, including a three-game set against West Virginia.