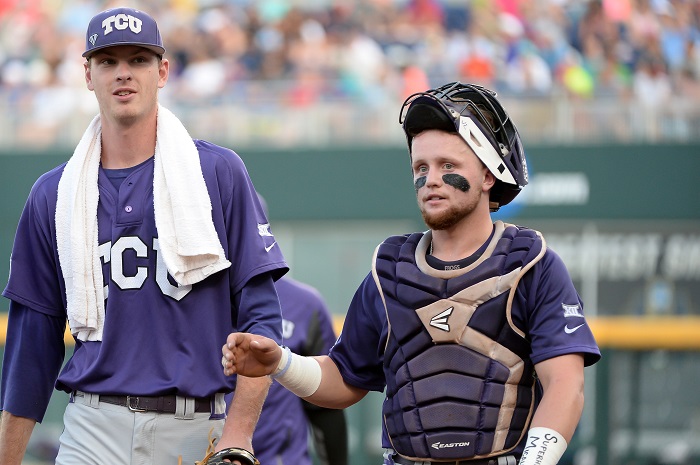 The Big 12 Baseball Championship is starting to whittle down to the final few teams. Here’s everything that happened on Friday, Day Three, and what you can look forward to this weekend.

“How many people in the nation are doing what this guy is doing, as far as a guy hit .350 and six wins and six saves, that’s factoring 12 wins out of what is it 34. That’s a major contributor on both sides of the baseball. He’ll be the first to tell you that he made that decision. He was fluttering around last year that he was really talented, but he had to make a commitment to be an elite player. If you want to be elite at anything, you have to act that way. He sure did make that commitment earlier this spring to be one of the best players in college baseball. Again, it’s effort, and now the results are falling.”

Perhaps the craziest game of the tournament so far. West Virginia rallies from a 6-3 deficit starting with a solo home run in the eighth by Isaiah Kearns which is believed to be traveling still. West Virginia tied this ball game in the ninth when Jackson Cramer hit an RBI single with a three-base error committed by Ryan Long in right field. Cramer continued to be clutch with a three-RBI triple in the 10th inning.

Texas Tech really gave this game away, but you have to give West Virginia credit. They stuck around. The bats are alive. They took full advantage of Tech’s mistakes.

West Virginia’s Cole Austen finished 3-for-4 with a double, a run scored, and a run batted in. Braden Zarbinsky tossed four innings, allowing one earned run on four hits and three walks. He also notched a hit.

Despite taking plenty of heat for the error in the ninth, Ryan Long was Tech’s bet hitter during the game. He blasted a two-run shot in the seventh inning to place Tech up 6-3. Long finished the day 2-for-6, scoring twice.

Texas Tech is considered a lock for a national seed. Most project them to be the No.4 team when the national seeds are announced.

“I think it’s just getting that cutter going. Tonight it took me while to get it going. They got some early hits when I fell behind in come counts early and I was able to work through them and limit damage. Just for me it’s about fastball command, fastball height, and being able to get that cutter going off of it. I was able to get the fastball down in the zone and establish it pretty much all night so I just look to keep it going.”

This game was a tale of two stories.

For TCU, Brian Howard struck out 12 batters during a complete game shutout. He allowed just four hits and did not walk any Jayhawks.

For Kansas, it was an awful night from the get go. Sean Rackoski walked the first three batters he faced. This led to a four-run first inning which Kansas never recovered from. Rackoski produced just one out.

Zack Leban provide solid relief for the 3.2 innings he pitched. Connor Wanhanen launched a triple in the fourth inning, and would score on a wild pitch. Austen Wade made it 6-0 when he was brought in after a balk by Leban.

Kansas entered the day ranked as the No.59 team in the RPI rankings. It is assumed their season is over.