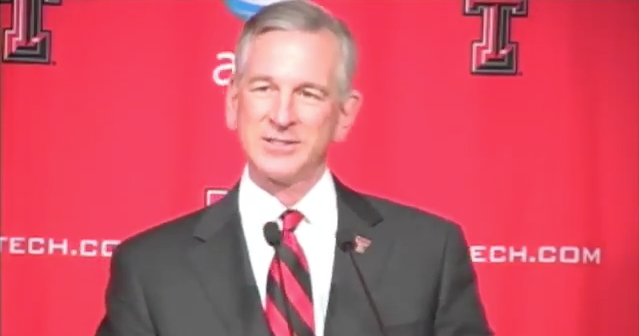 Less than a month ago, Tuberville told the Rick and Bubba Show in Alabama, “You run me off at Auburn and you ship me to Lubbock, Texas. I’m going to tell you what, that’s like going to Siberia. Somebody asked me, ‘What’s Lubbock look like?’ It looked like Iraq.”

Needless to say, folks in West Texas were not happy about the comment.

Late last week, Tuberville apologized for the comments on the “Thetford & Ashby Show” in Lubbock.

The former Red Raiders head coach said, “I’m here to apologize. I shouldn’t ever said that. My mom said there’s an idiot born every day. That day, I was an idiot.”

Tuberville coached Texas Tech from 2010 to 2012, going 20-17 before surprisingly bolting for the Cincinnati opening.

He went on to say in his radio interview, “I knew immediately when I got off the radio, ‘You know what, somebody’s going to take that the wrong way.'”

Tommy Tuberville added, “I always told my players that, about social media, talking, interviewing: Once you say something bad about somebody or good about somebody, it’s out there. I broke some of my own rules, and I should have never done that.”