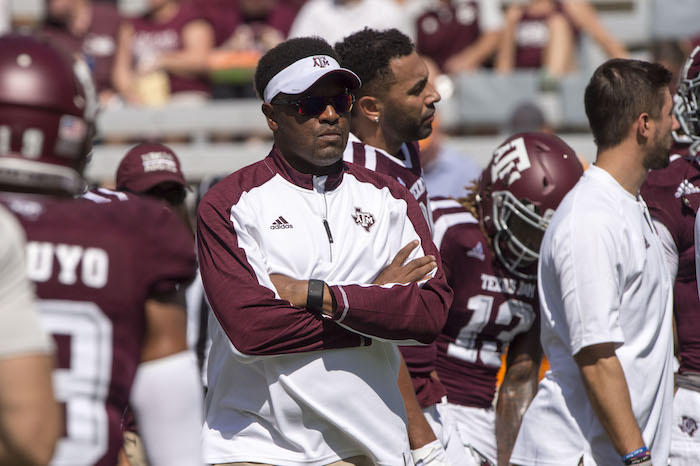 On Wednesday, TCU athletic director Chris Del Conte joined the Ticket in Dallas and said what no Texas A&M fan would ever admit: the Aggies screwed up by heading to the SEC.

Del Conte told the radio station’s morning show, “Thank God A&M decided to make a wrong error, (an) erroneous mistake. They left, allowed us to get in. It’s (been) smooth sailing ever since.”

You’ll never get a Texas A&M fan to admit it, but those convinced the Aggies are better off in the SEC are fooling themselves.

Sure, they’ll brag about the $40+ million in revenues the SEC schools are bringing in. Many will likely also point out that the program no longer has to sit in Texas’ shadow. But was it really a move that has benefited the program?

When you look on the field, A&M entered the SEC in 2012 with a bang thanks to Johnny Manziel and Kliff Kingsbury. They went 11-2 overall, finished 6-2 in the SEC, good for a T-2 in the SEC West and picked up a program-defining win over Nick Saban and Alabama on the road. Aggies fans thumbed their nose at the Big 12 and were convinced they were going to be in the top half of a loaded SEC West for the foreseeable future.

However, that’s been anything but the case.

A&M followed up the 2012 season with a top-10 recruiting class in 2013. But since then, the Aggies are 15-17 in conference play, Kevin Sumlin is on the hot seat, and many of the big-time recruits have not come close to living up to expectations.

If you look “what could have been” for Texas A&M in the Big 12 in recent seasons, Aggies fans might start to realize what a mistake they made. In 2012, it’s entirely possible the Aggies could have run the table with Johnny Manziel in the Big 12. Their only losses were to Florida in the opener and at LSU in October. They beat Alabama and Auburn on the road in a three-week stretch. They ended the season rolling Oklahoma in the Cotton Bowl. Had that team run the table in the Big 12 in 2012, it’s unlikely it would have played in the BCS National Championship, since Notre Dame went undefeated and Alabama’s loss to A&M would not have theoretically happened, but their momentum would’ve been the same coming out of the 2012 campaign.

It’s the years since then when A&M’s fortunes could’ve been much different. In 2013, returning Manziel, the Aggies went 9-4, with all 4 losses to SEC teams (Alabama, Auburn, LSU and Missouri). That was still when the SEC was, by far, the most dominant football conference in America. Three of those four A&M losses were by a touchdown or less. Had that team been in a Big 12 that was won by a Baylor team that eventually lost to Central Florida in the Fiesta Bowl, A&M would have likely been at, or near, the top of the conference.

Moving onto 2014, Texas A&M finished 3-5 in the SEC, which was second-to-last in the West Division. Meantime, the Big 12 finished a controversial season where Baylor and TCU were both 8-1 in conference play, and both just missed the first ever College Football Playoff. First off, it’s almost certain TCU would not be in the Big 12 had Texas A&M not left for the SEC (more on this in a second). Meantime, the Mississippi schools were both hitting their stride this year, making the SEC West even deeper than it already was.

Over the past two seasons, the Sooners have been the class of Big 12 football. But, the conference has not had a plethora of teams on the national stage. Also, the Longhorns struggled mightily through the Charlie Strong era. While it’s unlikely the Aggies would have competed with OU for Big 12 titles the past two seasons, the weaker Big 12 would’ve propped up the Aggies, and they likely would’ve had their way with Texas over the past 3-5 years. Seems like a win-win, no?

Also, the projected death of the Big 12 (which has been vastly overblown, and in many ways is “fake news”), would not be nearly the discussion it has been, had A&M still been in the conference with Oklahoma and Texas.

Now back to TCU, who I’m confident would not have been invited to the Big 12 had A&M stayed. If only Missouri left in 2012, then only West Virginia (or Louisville, had the Big 12 acted fast enough) would’ve been added. That means TCU’s ability to recruit on the same level as the rest of the Big 12 would not have been possible. Landing a major quarterback prospect like Shawn Robinson this past recruiting cycle, had TCU been in say, the AAC, would be nearly impossible.

On a larger scale, A&M leaving the Big 12 for the SEC opened the floodgates for SEC schools to poach even more recruits from Texas. While that hasn’t hurt Texas A&M’s recruiting (yet), it’s affected the rest of the Big 12. And it may very well start affecting the Aggies if their on-field mediocrity continues.

As it is, Texas A&M is currently a stale program. It’s been 4 years since the Aggies were over .500 in conference play. Kevin Sumlin’s job is believed to be in jeopardy, and there’s little reason to believe his team will compete at the top of the SEC this fall.

So you tell me, if the Aggies never left the Big 12, you’d likely have had a program that would’ve had more success on the field and made at least just as much money as it has been making with the SEC.

In hindsight, it sure seems like a lose-lose proposition, huh? Just don’t go to Amon G. Carter Stadium looking for any sympathy. The folks in Fort Worth couldn’t be happier.