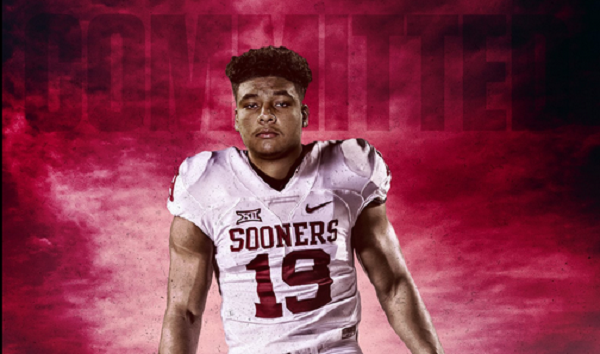 According to Lincoln Riley, he didn’t event know he was going to be the head coach of the Oklahoma Sooners one week ago. But here we are, and his first-ever commitment is a flip from the Texas Longhorns in strong-side defensive end Ron Tatum.

Back in April, Tatum committed to Texas in a ceremony at his school.

According to 247, Tatum is a four-star recruit and the 86th ranked player in the nation. He’s also ranked as the #4 strong-side defensive end and #2 player in the state of Oklahoma.

Tatum is the first commit since Lincoln Riley took over as head coach, and he was clearly pumped up about it on Twitter.

But it looks like Riley isn’t done there. He still has his eyes on a couple other prospects.

Time to hunt down 2 more from the home state…?

I assume that’s a reference to safety Josh Proctor from Owasso, who is a 4-star player current committed the Ohio State. The other would be Union HS wide receiver CJ Moore, who’s currently committed to Oklahoma State. Do we have a Bedlam Rivalry before the season even starts?

Lincoln Riley clearly isn’t going to play second fiddle to anyone as he begins his journey as a 33-year-old head coach.

This is huge for the Sooners and it gives the fan base a reason to breathe a sigh of relief. We still don’t know how exactly Riley will be as an in-game head coach, but he’s at least proving that he isn’t going to lose any momentum on the recruiting trail with the retirement of Bob Stoops.