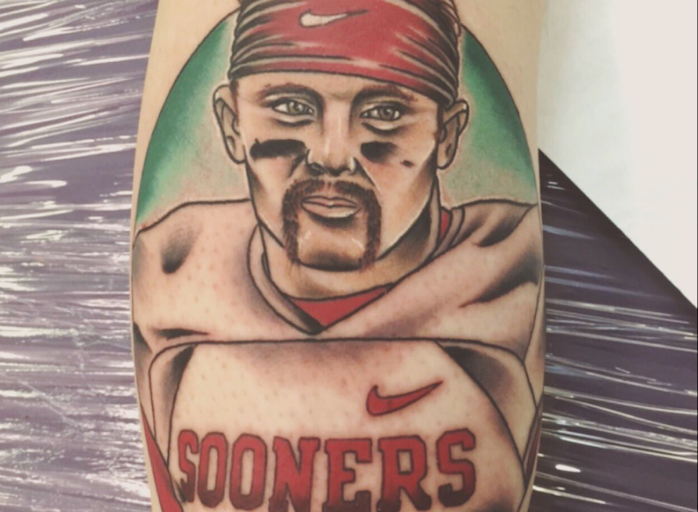 Over Memorial Day Weekend an Oklahoma Sooners fan decided to make a bold statement on Twitter saying he’d get a Baker Mayfield tattoo, if the OU quarterback retweeted him.

If @baker_mayfield6 rt’s this I’ll get a baker tattoo

Well, Mayfield did in fact retweet it, and the young man kept his promise.

As this story started getting national attention, I became fascinated with who this individual was. We spoke last week, but then the Bob Stoops news broke and it was mayhem for a few days, so we put the interview on hold.

However, below is our Q&A with this die-hard Oklahoma football fan, 21-year-old Kenneth Cody Holzhammer.

Q: How did you become a Sooners fan growing up?

A: My Father would always watch the games when I was little and the older I got the more addicted I would get. I honestly think today that I take Sooner losses harder than some of the players [laughs]. That’s just my opinion.

Q: What are your ties to Oklahoma?

I grew up in southeast Oklahoma (Wister). I’m currently stationed for the army in Louisiana until December, then I plan on studying sports management at Western Michigan University.

Q: So how did this idea to tweet at Baker about your tattoo come about? And how excited and shocked were you when he actually retweeted you?

A: I mean I was going to get “OU” in all black tatted on my leg, but I decided to bump it up a little. I just wanted to see if Baker would approve of it before I actually got his face on my leg [laughs]. And he did. So I couldn’t back out. I was very shocked when he retweeted it and was even more shocked whenever he messaged me!

Q: What did Baker message you saying?

A: He said I was wild for actually doing it, but he invited me out to the first home game!

Q: How much did the tattoo cost?

Q: Did you get to a lot of games growing up?

A: I’ve only been to one, unfortunately. It was in 2005, and was an overtime win against Baylor.

Q: Any regrets on the tattoo?

A: No regrets at all, my friend.

Q: What tattoo would you get when Oklahoma wins its next National Championship?

A: Honestly I would probably get one with the year of each natty.

Just remember, anytime you think you’re the most intense and biggest diehard fan of whoever your favorite team is, you’re no Kenneth Cody Holzhammer. He put his money where his mouth is, in a big way. And of course, we thank him for his service.