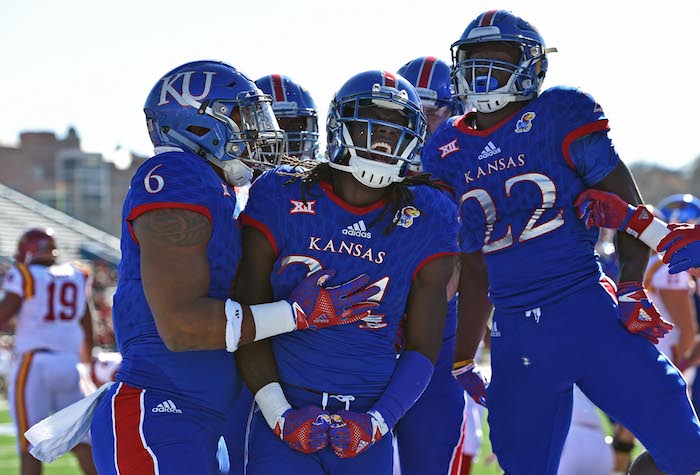 It was 5 1/2 years ago that Missouri bolted the Big 12 conference in favor of the SEC. Since then, the University has won two SEC East titles, but has quickly seen its fortunes in football, basketball, and on campus diminish. Struggles on the field and on the court have been nothing compared to its embarrassing decision to take fake protests seriously, which has resulted in a major decrease in enrollment.  But, could bringing back the “Border War” be a move to help stabilize Mizzou, while giving the fans of both teams something they want?

If I’m Kansas President Girod, AD Zenger, and others, I’d respond with a resounding “no”.

Last week in Kansas City, Missouri’s new AD Jim Sterk (who was hired to replace Mack Rhoads, who left Mizzou for Baylor, which tells you all you need to know about where Mizzou stands. But I digress…) was asked about restarting the Border War, to which he responded, “I’d like for that to happen. I think they made it a point when we left the (Big 12) that they weren’t going to play anymore, but we’re certainly open to that and I know (new men’s basketball coach) Cuonzo (Martin) will work on that behind the scenes and see if that can happen.”


Now in fairness to Tod Palmer, who is a solid writer for the Kansas City Star, he didn’t really do the story justice when he wrote that Missouri left for the SEC “for the stability and financial security of the Southeastern Conference.”

That’s not telling the whole story. Missouri was determined to join the Big Ten when commissioner Jim Delaney first opened up the idea of expanding nearly 10 years ago. In fact, when Delaney brought up expansion, Missouri was the annoying kid in the front of the classroom raising his hand in desperation, yelling, “Me! Me! Me! Me! Pick me!”.

The SEC was clearly the second choice for folks at Missouri, and it’s been a mess for all parties involved.

Missouri needs the Border War far more than Kansas does right, as the Tigers are suffering from an identity crisis.

The Tigers are now in the SEC East, with their closest divisional foes, Kentucky and Vanderbilt, sitting 460 miles away and 431 miles away, respectively. Meantime, every year the Big 12 basketball tournament is played a mere 125 miles away. A place their fans used to flood for a weekend of fun in the Power & Light District. Next year, the Tigers get a reprieve with the tournament being held in St. Louis, but after that it’s back for the 400+ mile trip to Nashville.

Not only is there a geographical issue for Missouri, there is a lack of a cultural fit for the Tigers in the SEC as well.While there has been discussion of flipping Missouri to the SEC West and adding Auburn to the SEC East, we all know that’s not anywhere close to happening, and it takes much more schedule-manipulation (to maintain games like Alabama-Auburn) than many SEC folks are willing to bother with.

I have been outspoken about restarting Texas vs. Texas A&M, but the difference is I think both sides can benefit from picking up the Thanksgiving tradition. How would Kansas benefit from putting Missouri back on their schedule in football and hoops? It wouldn’t.

Maybe one day it’ll make sense to pick up the rivalry. But the emotions are still too raw for many involved with KU. Also, why reward Missouri for leaving?

That’s what Kansas would be doing by allowing Missouri to bolt the Big 12, yet still hang onto its oldest rivalry. These two schools had been tied at the hip since forming the Missouri Valley Intercollegiate Athletic Association in 1907, and MU thought they could find greener pastures.

They haven’t. Sure they’re pulling in their $40 million from the SEC, but so are many teams in the Big 12 conference, when including third tier rights. Academically, the SEC can’t hold a candle to the Big Ten.

Yet now the university is looking for a Border War bailout to light a fire under a fan base that doesn’t have much to cheer for and is in a conference that makes it nearly impossible to travel to road games on a whim?

No thanks, Missouri. You reap what you sow. Enjoy the long road trips, and hope the gas prices stay at a reasonable level. You’ll need it.