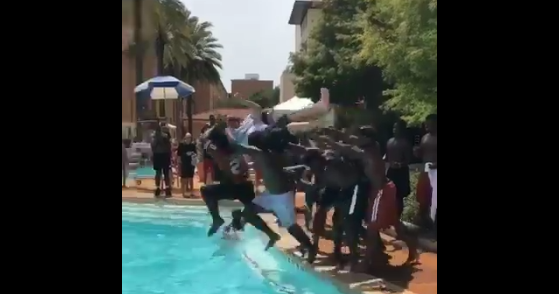 Tom Herman’s twitter account is taking a page out of Jim Harbaugh’s “How to Use Social Media” book.

What do I mean exactly?

Both coaches are present a surly personality in public and with the media. But behind the scenes, they appear to be entirely different people. Also, they’re playing the social media game to perfection.

The latest example comes from this past weekend when Herman was RKO’d into a pool by some of his Texas players.

Obviously Herman approved this being put on social media and it makes him look like a hip guy that connects with his players and can goof around when the time is appropriate. I mean, who wouldn’t want to play for a head coach that you can RKO in the offseason?!

And don’t forget, it was just last week that Herman was asking his followers about Tupac lyrics.

In honor of one of the greatest lyricists of all time, what is your favorite 2Pac song? Happy Birthday #2Pac.

But if you needed more proof of the value Tom Herman sees in social media, the University hired Matt Lange away from Alabama to become the new creative director for social media this offseason. Herman understands how to use the medium to be funny, unique, quirky, creative, and to create and build a program’s brand.

When Jim Harbaugh made the move to the college ranks from the NFL, his social media usage and popularity exploded. Why? All of the sudden he wasn’t just a football coach of adult men, he was the face of a college program and needed to convince teenagers that he was the guy they should trust their futures with.

So while he kept a relatively stonewalled approach with the media, he was a different guy on Twitter, like when he took a clear shot at Ohio State.

Good to see Director Smith being relevant again after the tattoo fiasco. Welcome back!

But he also proved he could just be funny, and maximized his social media account while taking the team on a highly-publicized team trip to Italy.

Who do you think can shout louder? Me or @MrPeanut? #adpic.twitter.com/EEuu3x9P3I

If you don’t believe this can have a positive impact on a program’s recruiting, you likely haven’t had any interactions with teenagers in a good ten years.

Herman is hoping to revitalize the Texas football program just like Harbaugh has at Michigan. Harbaugh is 20-6 in his two seasons with the Wolverines, while Herman is preparing for Year 1 after replacing Charlie Strong, who just finished the first three-straight losing seasons for Texas since the late 1930s.

While Texas is one of the premier programs in the country, it failed to use its financial muscle to maximize some of the new-age recruiting techniques. The program was too folksy for its own good, starting with Mack Brown and continuing (to a lesser extent) through Charlie Strong. Herman changed that the minute he walked on campus.

So while things on social media may seem like just fun and games, cool, and off the cuff, remember every tweet, facebook post and instagram is carefully crafted behind the scenes to create an image. In many ways, it’s like how most people live their lives these days: using social media to pretend they have the best family, homes and things money can buy.

Behind the scenes, it can sometimes be a different story.

But don’t hate on Tom Herman or Jim Harbaugh for that, hate the game.