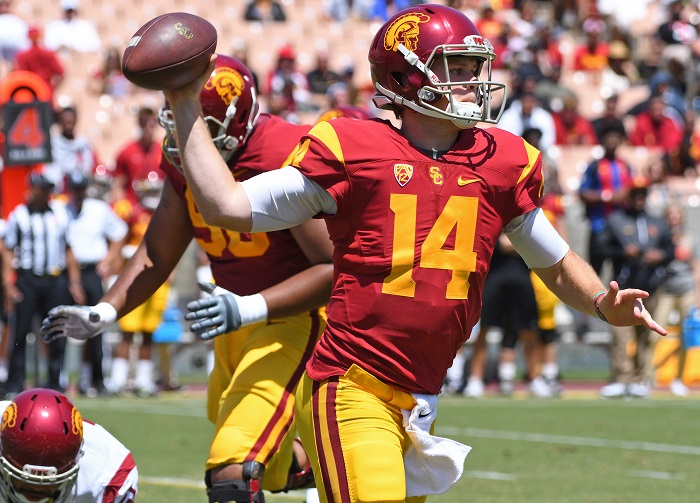 While we are all getting ready for games like the Red River Shootout, Bedlam and others, we often overlook or might forget about some of the Big 12 non-conference games on the schedule. So as we inch closer towards the season getting underway, here are the best quarterbacks from outside the Big 12 that the conference will face this fall.

Henderson hasn’t played much football since high school in Virginia in 2013. He redshirted in 2014 at UNC, played sparingly in 2015, and transferred to Maryland and had to sit out last season. But he was a top-ten QB in the nation coming out of high school and an All-American. Let’s hope he doesn’t take three frustrating years out on the Longhorns. My guess is he will be quite rusty.

Hicks was thrown into action as a freshman after Matt Davis suffered a season-ending injury in Week 1 last year. He got Big 12 experience in games against Baylor and TCU, and ended the season with nearly 3,000 yards passing and 19 touchdowns to 15 interceptions. First he has to hold off Rafe Peavey in the QB battle this summer.

Barnett was a former five-star QB prospect who was supposed to be the next national championship-winning quarterback at Alabama. Barnett won the job last fall at Bama, but after early struggles he lost the job to Jalen Hurts, who never relinquished the position. Barnett won an appeal to the NCAA to play immediately and will be a redshirt sophomore this fall. Manny Wilkins is the returning starter who got injured last season, but most reports give Barnett a leg up for the job. Frankly, I don’t see how Barnett doesn’t get the job, since often times a player of his caliber knows he’s transferring to the place that allows him the best chance to play ASAP. I expect to see Barnett under center in September, and revenge from a strange ending in Tuscaloosa will be on his mind.

Allen is another former five-star quarterback who transferred to Houston after a stint at Texas A&M. Allen was the scout team QB last season and while Tom Herman is gone, he gets to keep the same offensive system he learned under then-offensive coordinator Major Applewhite, who is now the head coach. In two seasons with the Aggies, Allen played in 20 games (14 starts) and threw for more than 3,500 yards and 33 touchdowns. I expect Allen to thrive with the Cougars.

As a freshman last season, Jones threw for nearly 3,000 yards with 16 touchdowns to 9 interceptions. Jones joins Heisman winner Lamar Jackson as one of two returning QBs in the ACC to have produced 2,500+ passing yards, 15+ passing TDs, 450+ rushing yards and 5+ rushing TDs a season ago. He’s only entering his redshirt sophomore season and had an entire offseason under head coach and quarterback guru David Cutcliffe. On top of that, Jones might have the deepest group of wide receivers Duke has had under Cuttcliffe, let by TJ Rahming, who had over 1,300 receiving yards in his first two seasons in the slot for the Blue Devils.

Barrett enters his senior season looking to recapture the magic from early in his career in Columbus. He’s hoping former Indiana head coach and Oklahoma offensive coordinator Kevin Wilson is the quarterback whisperer he needs. Granted, while Barrett had an up and down 2016 season, his performance in Norman last year was arguably his best of the season: 14/20, 152 passing yards, 4 touchdowns, 0 interceptions and 74 rushing yards. Mike Stoops should be losing sleep over how he will stop Barrett this year… in the Horseshoe.

Sam Darnold is the favorite to win the 2017 Heisman Trophy and welcomes in the Longhorns in mid-September for a game that could define Tom Herman’s first season with Texas.

Sam Darnold is took over as the starter in late September for the Trojans last season, helping USC finish 2016 with nine-straight wins, highlighted by a Rose Bowl win over Penn State. Sam Darnold finished with over 3,000 passing yards, with 31 touchdowns to 9 interceptions. There’s already speculation of NFL teams tanking to take him as the No. 1 pick in the 2018 draft. Granted, we’ve seen this before with the likes of Jake Locker at Washington, but this feels different.

Sam Darnold is a stud, but if Tom Herman and the Longhorns can slay one of the favorites to make the College Football Playoff, UT fans will believe the turnaround is finally here.