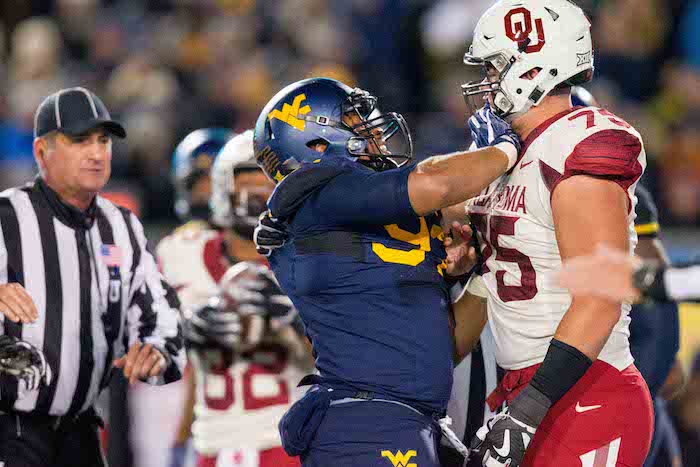 As we all yearn for the slow summer months to be over and to finally get back to college football, why not have some fun and rank what I believe will be the top 10 Big 12 football games to watch this fall.

Starting our list of the best Big 12 football games to watch this fall is an out-of-conference match up in Fayetteville, Arkansas. These two teams played a classic double-overtime game last September that ended with a Razorbacks 41-38 win. Gary Patterson and the Horned Frogs are looking for a bounceback season and get an early-season shot at an SEC opponent, which can boost any team’s morale. The defense is hoping to make big strides from last year and gets a good test with Arkansas QB Austin Allen set for another big year. And hell, Big 12 vs. SEC is always worth something.

After news came out last week that quarterback Will Grier will be eligible to start the 2017 season for the Mountaineers, this game takes on a whole new meaning and level of importance for WVU. Grier comes in from Florida with a ton of hype, and the program is hoping to continue its momentum from last year’s 10-win season. It’s two old Big East rivals playing a neutral site game to start the season. Plus with the ACC rapidly rising in the Power 5 hierarchy, getting a win over a solid ACC program would be a great way for WVU to kick off the season. Also, national TV in primetime, so a little extra juice on the line here.

Tom Herman will be looking for that “statement win” early in his UT tenure, and nothing would do more to raise the program’s profile than beating Heisman-favorite Sam Darnold and the USC Trojans. It’d kind of be like that huge, program-defining win Charlie Strong got over Notre Dame last year…… oh, wait. Just don’t lose to Kansas later in the year. But this game’s outcome will go a long wait to defining the narrative for Texas this season. Can Herman really launch UT into win-now mode, or is this (hopefully) the final year of a way-too-long rebuild?

The Buckeyes handled the Sooners fairly easily last year in Norman. Now the tables are turned, which doesn’t bode well for Oklahoma. Quarterback J.T. Barrett will try to recapture his magic from early in his career and will now have a former Sooner in his corner with Kevin Wilson runing the offense in Columbus.

But if Oklahoma is going to try and have that magical run in Lincoln Riley’s first season on the job to a College Football Playoff, this is practically a must-win game. With a loss, OU would have to run the table through a conference championship game to even have a shot. Oklahoma vs. Ohio State is, by far, the most anticipated non-conference game in the Big 12 this year.

This game could have several things on the line. Is it Tom Herman trying to possibly put UT in a Big 12 championship game with a win? Could Kliff Kingsbury be struggling through another season in Lubbock, and a potential win over the mighty Longhorns keep him employed in Lubbock (a la Charlie Strong’s final chance to save his job vs. TCU to end last season)?

It’s never going to be what Texas-Texas A&M was on Thanksgiving night, but maybe with two young coaches running the respective programs, some kind of real rivalry can start brewing here with some high stakes on Black Friday. Granted, those stakes are likely to have a very different meaning for each coach.

From 2012 to 2014, these two teams played three-straight games that were decided by 10 points or less. The last two years haven’t quite yielded those same close contests. OU has beaten K-State by a combined score of 93-17. But Kansas State will be a darkhorse for a Big 12 title and if they are serious about contending, this would be as big a win as it gets.

Oklahoma will be coming off the Red River Rivalry, while K-State will have played three-straight games against Texas schools (Baylor, Texas, TCU). It will only be October, but the Big 12 race will begin to clear up after this game because Oklahoma, Texas and Kansas State will have all already played each other when this one comes to an end.

Will this be Oklahoma’s chance to punch its ticket to the Big 12 championship game? Hell, could West Virginia be vying for a shot in the title game as well? The Mountaineers are being severely overlooked this year and will be looking for revenge from last year’s disastrous 56-28 loss at home as the snow was falling in Morgantown. That game basically shut out the Mountaineers from having a shot at the Big 12 crown in 2016.

But how does having Will Grier change the equation at WVU? Can Tony Gibson turn over a defense for a second-straight year and and make it one of the Big 12’s best? If so, this final Big 12 game of the regular season could have huge implications for both teams.

The old guard versus the new guard. Bill Snyder against Tom Herman. These two teams play relatively early in the conference schedule and will set the tone for the rest of Big 12.

Kansas State should be 4-0 at this point in the season (Central Arkansas, Charlotte, Vanderbilt, and Baylor), while Texas is likely sitting, at worst, 3-1, with a loss to USC and wins over Maryland, San Jose State and Iowa State. A loss to USC obviously wouldn’t affect the Big 12 standings, so this is a chance for each team to make an early-season statement heading into the rest of the conference schedule. With Texas playing in the Red River Rivalry the following week, this is one the Longhorns cannot overlook.

I mean, it has to be at least top 2. Not only are both programs being run by new head coaches in Lincoln Riley and Tom Herman, but both teams have Big 12 championship aspirations, if not more. It’s a crucial two-game stretch for Tom Herman with K-State and Oklahoma, likely two of the top 4 teams in the official preseason coaches poll in the Big 12, in back-to-back weeks. Meantime, Oklahoma has had such massive success over UT in the rivalry in recent seasons, Lincoln Riley does not want to lose that momentum handed to him by Bob Stoops.

Not only that, but these two programs are back to seriously recruiting against each other off the field. This game should have a little more juice to it than it’s had over the past half a decade or so.

They’ve been consistently the best two teams in the Big 12 over the past several seasons. This game has decided the conference champion the past two years. With these two teams likely to be 1-2 in the official Big 12 coaches picks before the season, it’s possible this could end up as a rematch in Dallas in early December.

I will miss this game being in the final week of the season, but it was the smart play by the Big 12 to avoid these two teams potentially playing a meaningless game the final week of the season and then having a rematch 7 days later. The rivalry has been filled with plenty of drama in recent seasons. Can Mike Gundy finally get over the hump and beat OU when it matters most? Or will the ghost of Bob Stoops live on through Lincoln Riley?

Either way, this is the premier game heading into the Big 12 season, and until proven otherwise, every other game is a distant second.