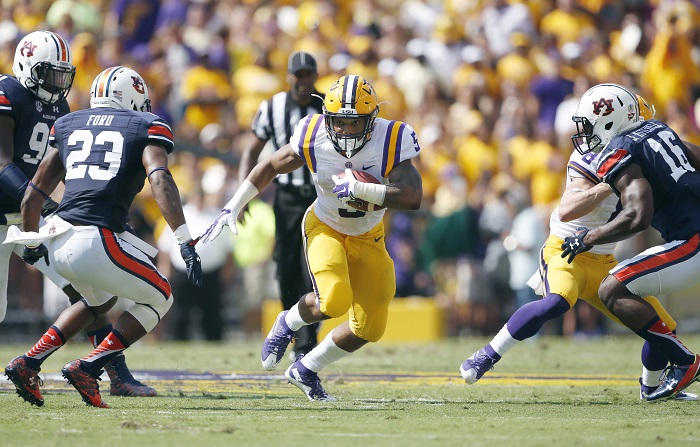 Last week on Heartland College Sports, we gave out our preseason awards, where West Virginia QB Will Grier was voted as the Big 12 Newcomer of the Year. While Grier is a great choice, it wasn’t mine. I voted for Oklahoma State wide receiver (and LSU transfer) Tyron Johnson.

As time has gone on, I’ve only become more confident that he will become the best new face in the Big 12 conference this fall.

Tyron Johnson has a few advantages over the others that are eligible to win the award.  The word “newcomer” is key here.  To win the award it has to be your first year playing in the conference.  That puts Johnson up against a lot of freshmen and a few transfers like himself, but in my opinion he has big advantages over all of them.

As a former five-star recruit he is a stud, and while there are more than a few of those scattered around the Big 12 how many of them have already gone through years of playing football at a major university?  As a redshirt sophomore he’s already been conditioned for the grind of high level college football.  Freshmen come in far more ready to compete than they used to but that first year of strength and conditioning reshapes these young men.  Sometimes you get a freak like OU’s Adrian Peterson who could’ve played in the NFL straight out of high school, but that kind of ability is once-in-a-decade kind of talent.  The fact that Johnson has already gone through three summers (one at LSU and two at OSU by the time the season starts) and a full college football season for the Tigers gives him a huge advantage over any kid who was in high school last year.  His nine games started for the Bayou Bengals give him a leg up on all those redshirt freshman.  Unless the perfect young talent ends up in the perfect system they shouldn’t threaten him much.

He does have a few other transfers to contend with who share the same advantage of already being used to big boy football.  West Virginia’s Will Grier and Oklahoma’s Jeff Badet are most likely the biggest competition who moved into the conference from another school.

Grier will be WVU’s starting quarterback after transferring from Florida and serving a year suspension for using a NCAA banned over the counter supplement.  He’s had a year to learn Dana Holgorsen’s system, but the Mountaineers lost two of their top three receivers from last year, and five of the top seven offensive linemen.  Add in Hologorsen’s new found love for the running game along with stud running back Justin Crawford to hand the rock to, and Grier may not put up the kind of eye-popping stats to win the award.  That’s not a knock on Grier who I think will be great for the ‘Eers, but stats win this award. He’ll probably have to win the conference to have a shot.

Oklahoma was happy to get Jeff Baget from Kentucky.  They desperately need wide receiver help after Dede Westbrook moved on to the NFL. The Sooner’s will tell you their wide receiver group is full of potential, but potential doesn’t always pay off.  Baget put up decent numbers last season, leading the SEC with an insane 21 yards per catch, but he only caught 31 passes, 4 touchdowns, and netted only 670 yards.  While OU is hoping he’s the next in a line of great transfer receivers, it will be hard for him to win Newcomer of the Year without at least doubling those numbers, a difficult task unless he matches Westbrook’s blazing speed.  Plus if any of that wide receiver potential pans out, look for Lincoln Riley to spread the ball around more, which would suppress Badet’s numbers.

But the biggest advantage Tyron Johnson has over his competitors is being at Oklahoma State.  Yes, the Cowboy’s have an embarrassment of riches at wide out, but that will actual help him.  Many expect Johnson to line up wide opposite James Washington, but I’m not certain that will be the case.

I expect to see him in the slot next to the All-Big 12 receiver.  Playing them side by side would really open up things for Johnson who could feast on defenders left one on one while the help goes to Washington.  Send Washington deep and Mason Rudolph can hit a Johnson underneath as the safety back pedals to cover over the top.  If Washington runs a curl or a slant, Johnson can sprint past the defender who paused to help cover the number one guy.

Also note, the entire defense can’t shade to the theoretical Washington/Johnson side or it will leave 6 foot 3 Marcel Ateman one on one to jump ball them to death on the other side.  Against the Cowboys, defenses will either have to play umbrella zones to try to keep all of OSU’s receivers in front of them, or blitz and try to pressure Rudolph into making a mistake.  Mason has already stated that Johnson is OSU’s best receiver in space with the ball in his hands, so short throws under a zone or away from a blitz play right into his skill set.

I do understand that with so many receivers it could prove difficult for Tyron Johnson to put up the kind of numbers catching the ball to win Newcomer of the Year. But the skill of his that will help win him the award: being the best receiver in space with the ball in his hands.  Offensive coordinator Mike Yurcich loves to call reverses and sweeps, so Johnson will be able to put his skills to use there.  And again the attention paid to James Washington will help open those up.  Add in his inevitable kick and punt return duties, where the Pokes have been lacking an elite talent since the infamous Stoops Repunt, and he could become the all-purpose yard darling of the Big 12.  It’s not a stretch to think he could end up with 900 yards receiving, 300 yards rushing, and 800 yards combined between kick and punt returns.  If he can pull off 2000 all-purpose yards and 10 touchdowns combined he’d be an almost sure thing.

Oh yeah, I expect him to throw a touchdown at some point too.

Tyron Johnson will end up as the best jack of all trades in the conference, and I’m ready to mark him down for Newcomer of the Year.