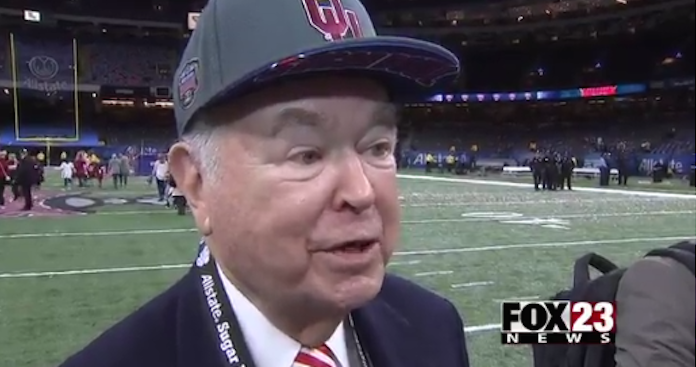 While most Oklahoma Sooners fans want to see the Texas Longhorns go 0-12 every season, that’s not really the best case for OU and the Big 12 moving forward. Oklahoma president David Boren gets that.

In an interview with the Dallas Morning News, David Boren was asked if he needs Texas to return to its dominance from a decade ago. The president responded:

“The truth of the matter is that we really need for others – everyone in the conference – to succeed. It helps everybody. A rising tide lifts all boats. Now we don’t want them to do it at our expense (laughing). I’m philosophically in favor of a 10-win Texas.”

Guess what? David Boren is right.

The Big 12 is at its best and is getting the most attention when Oklahoma and Texas are top-tier programs in the country. In a weird way, the two fan bases should root for their most-hated rivals in every game but the Red River Rivalry and then in a theoretical rematch in the Big 12 championship game.

Just look to the SEC, which had a rise to dominance in the past decade or so thanks to its two powerhouses, Florida and Alabama. It just wouldn’t be the same had it been Ole Miss and Kentucky. Meantime, the Big Ten is seeing a resurgence thanks to its biggest rivalry, Ohio State vs. Michigan, having renewed meaning thanks to both programs regaining national prominence. Michigan State and Wisconsin are nice programs, but they aren’t going to carry a conference like Ohio State and Michigan.

In the Big 12’s case, it was great to see Baylor, TCU and Oklahoma State have strings of success in recent seasons. But look at what happened the first year of the College Football Playoff when TCU and Baylor got hosed. I will always believe that had TCU or Baylor had the name “Sooners” or “Texas” across their chests, they would have made the College Football Playoff. The 13th data point was probably somewhat true, but hell, Ohio State didn’t need one this past season, huh? Wonder why…? Think if Minnesota had Ohio State’s season and miss the Big Ten Championship game they would’ve made the Playoff? Unlikely.

With Oklahoma and Texas both having new head coaches at the same time for the first time in decades, this is an exciting time for the rivalry to take itself to a new level and turn the page. The rivalry has still had juice, but it had gotten stale from it’s heyday of the mid-2000’s when Mack Brown had the Longhorns at the top of the standings against Bob Stoops.

Now all this doesn’t mean that having West Virginia, Texas Tech, Baylor, Oklahoma State, TCU, etc. near the top of the Big 12 is bad for the conference. Having the occasional upset is a good thing for any conference. Think back to the mid-2000’s in the Big 12 when Kansas and Missouri had a great rivalry going in the Big 12 North. Nebraska was still in the mix in a big way. Then of course, there was the Big 12 South’s controversial three-way tie in the 2008 season with Oklahoma, Texas and Texas Tech. The Texas-Texas Tech game remains one of the legendary games in Big 12 football history.

But once again, the lynchpin to what made that a legendary season was that while there was plenty of competition in the Big 12 conference, Texas and Oklahoma remained near the top of the standings.

So if you’re a fan of the Oklahoma Sooners, or even root for the Mountaineers, Cowboys, Horned Frogs, Bears, Cyclones, Wildcats or Jayhawks, pull for the Longhorns this fall. It’ll be best for all of us.