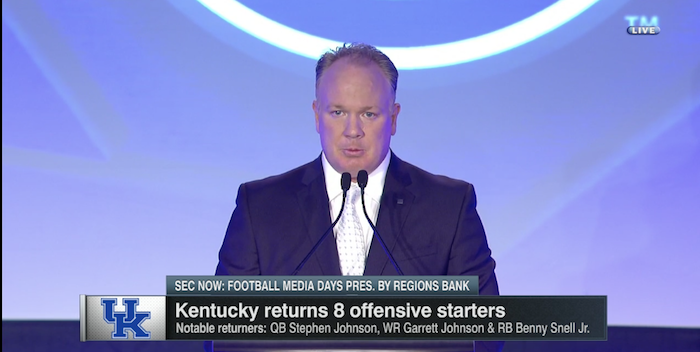 If you think you were surprised when Oklahoma head coach Bob Stoops decided to retire last month, then you are right there with his brother, Kentucky head coach Mark Stoops.

Mark Stoops took to the podium on Wednesday to address the media during SEC Media Days and it was only a matter of time before he was asked about Bob’s retirement.

Stoops said, “I had no idea it was coming when he called me and told me. It was a bit of a shock to me. It’s one of those moments you don’t forget. It came out of the blue. I have mixed emotions about it still, but I’m proud of him.”

Mark added that he had to take a walk around his building after the phone call with his brother, but added that it was typical Bob, doing this on his own terms and in his own way.

Anyone that follows Oklahoma Sooners football knows Bob Stoops marched to the beat of his own drum, so from that angle, it wasn’t all that shocking.

Oh and for those of you wondering, Brent Musburger believes that the Kentucky Wildcats are the top dark horse pick in the SEC this fall. So maybe Mark can carry the torch for the Stoops family at the head coaching level in college football.

The whole time Mark Stoops was at the podium had me thinking… pic.twitter.com/4IpELshFXq

Speaking of which, has anyone seen Sean Spicer lately? Talk about going MIA.