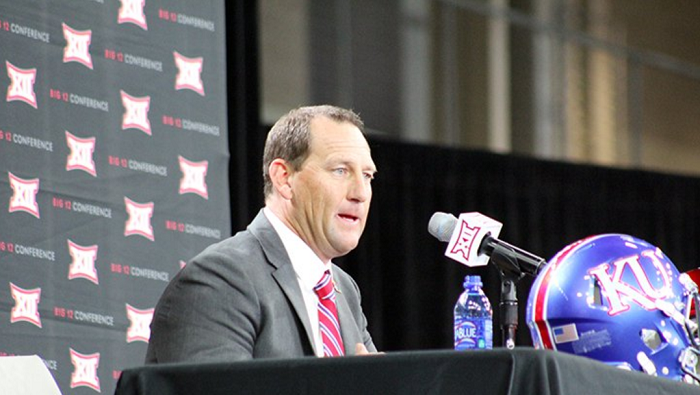 David Beaty is entirely too upbeat to be head coach of Kansas football.

Since he arrived in Lawrence before the 2015 season Beaty has always appeared to be oblivious to the fact that he’s taken over one of the worst programs in FBS in recent memory. Under Beaty the Jayhawks are 2-22 in two seasons. And yet …

“It’s a great time to be at the University of Kansas,” Beaty said to open his press conference at Big 12 Media Days at The Star in Frisco.

Great? For a program that hangs out in the shadow of its ultra-successful basketball program as a thing to do until mid-November? Or at least that’s how it seems.

But, strangely Beaty — and Kansas football in general — may have cause to be upbeat for the first time since the Mark Mangino era, as he took the Jayhawks to a 12-1 record and a BCS Bowl berth in 2007.
Beaty managed to lure away one of the Big 12’s top offensive coordinators, Doug Meacham, from TCU. Their views on the Air Raid offense are eerily similar. Beaty has found some ground to make up in the recruiting battle in the Big 12. Of course, the Jayhawks managed a monumental upset by beating Texas last season and notched their first Big 12 win over Beaty.

Then, in June, the university made a $300 million — yes, $300 million — commitment to football facilities, including a renovation of Memorial Stadium.

Nothing says stability to potential recruits quite like booster money for new digs. It’s a commitment that will help Beaty on next year’s recruiting trail, and it seems unlikely, given that commitment, that his job is in jeopardy this season.

The win over Texas may have lit the match, but David Beaty knows the time is now to fan the flame and turn it into something that will set off alarms in the Big 12.

“It’s yet to be seen whether (that win) can be a cornerstone in our program as we turn this thing around,” Beaty said. “It would be a shame for us to waste that opportunity. I hope we can make it one of our cornerstones as we move forward.”

David Beaty acknowledged the win made a difference on the recruiting trail. Additionally, he believes the new financial commitment will do the same, even though one can never know if those players will turn into someone like defensive end Dorance Armstrong Jr.

Armstrong is the poster child for what David Beaty hopes will be a “take a chance on Kansas” movement. The Houston, Texas, native was a three-star player and Top 100 player in the Houston area coming out of high school and chose Kansas over offers from eight other Power 5 schools, including Big 12 rival Iowa State.

The junior played right away as a freshman and has grown from an undersized 212-pound pass rusher to a 253-pound end who was selected the Big 12’s preseason defensive player of the year after notching 10 sacks last year.

He turned out to be one of Beaty’s first recruits, and it’s paying off. Beaty sold Armstrong on the future and not the past.

Beaty said that Armstrong is one of those players that works hard every day and the development is starting to pay off. It’s not a coincidence that you could draw a line from Armstrong’s development to Kansas’ development overall.

“Part of the biggest challenge is understanding they call it development because it doesn’t happen overnight,” Beaty said. “You have to develop. It takes us a while to get there, and we obviously now are very excited because all of our young-ins are three years into it and they’ve got some experience.”

And now they have one of the most productive offensive coordinators in Meacham, who most recently helped turn TCU from a pro-style offense to an Air Raid offense. In three years with the Horned Frogs he fueled their rise in the Big 12, including a near-miss at reaching the first College Football Playoffs in 2014.
With stops at Houston and Oklahoma State, he’s cultivated a reputation coordinating offenses that produce dizzying numbers.

So what the heck is he doing in Lawrence? Well, David Beaty has been working on him for a while. They first met when Meacham was a college assistant coach and Beaty was working as a high school coach in the Dallas area. Meacham worked Beaty’s school. When Beaty took over at Kansas he made a full-court press to try and lure Meacham to Lawrence, joking that he called Meacham “ten times.”

“I told him, look, look, you can have all the money,” Beaty said. “I’ll hire everybody else for a dollar.”
Beaty clearly wanted Meacham and now he has him. Two coaches with similar views on offensive philosophy and have a cast of under-the-radar offensive weapons that includes wide receiver LaQuvionte Gonzalez, wide receiver Jeremiah Booker and wide receiver Steven Sims Jr. Meacham worked wonders with Trevone Boykin at TCU, turning him into a Heisman candidate. That’s probably a stretch for the Jayhawks, but Meacham has a pair of interesting players to work with in sophomore Carter Stanley and juco transfer Peyton Bender, the latter of which did a little time at Washington State under Mike Leach, who runs a similar Air Raid offense.

And, not surprisingly, Meacham seems to share Beaty’s upbeat attitude.

Beaty clearly measures progress differently that the rest of college football. That’s probably a given when you consider what he inherited. Two wins in two seasons would put a coach on the hot seat these days. Beaty talks and acts like a coach sitting on an ice-cold chair.

Perhaps it’s his approach. He admits that when you’re a coach of a program like Kansas, where the wins have been few and far between, you’re selling your program to the outside world as much as you’re trying to coach up your players.

“I do think that one of the things that a head coach, I believe, has to do is you do have to carry that flag for your program,” Beaty said. “I think that’s part of the job. It is. And creating that culture is really, really important, and then it’s up to individuals to decide whether that is something they believe in or not.”

David Beaty’s coalition of the willing seems to be growing. His program’s confidence seems to be swelling. Perhaps Year 3 is the year that the results on the field outstrips Beaty’s own upbeat personality.