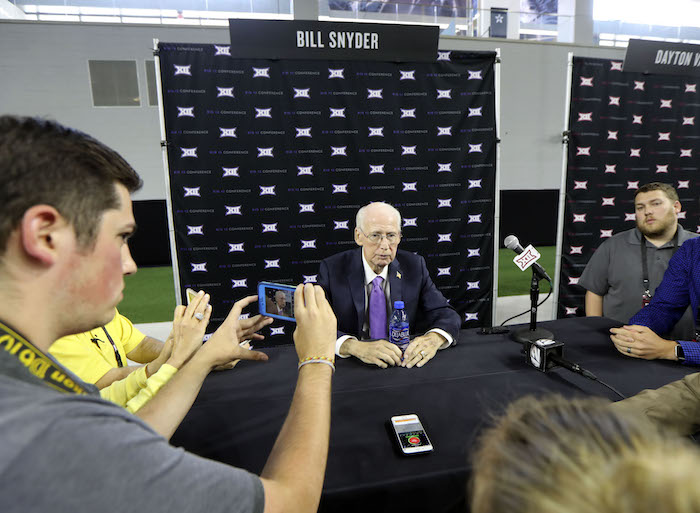 “He shared that information with his teammates over a year ago,” Snyder said Tuesday during Big 12 media days in Frisco, Texas. “I appreciated our players’ response, the response of our coaches, and Scott’s response as well to his teammates. Their thought was, ‘Okay, fine, let’s move on. So what?’”

Frantz told ESPN’s Holly Rowe about his experience telling his teammates that he was gay during his redshirt season in 2015.

According to Frantz’s teammate, offensive lineman Dalton Risner, Frantz shared the news in a completely organic way. The Wildcats had a motivational speaker on campus to talk with the team. The speaker talked about various things, but he challenged the Wildcats to get into a circle and talk about the things that were bothering them, the things they were holding in and struggling with. Risner said other players started talking about their home life and other experiences that they hadn’t been able to share previously.

As teammates shared emotional stories Risner, who had become good friends with Frantz, looked at his teammate and saw a man who was “trembling, crying, he couldn’t even breathe,” Risner said.

Then Frantz confided in all of them that he was gay. It was the first time he had ever told anyone.

“We’re in a group hug for probably 30 minutes,” Risner said. “He’s crying, hugging everyone and he says, ‘Guys, if there is one thing that I want you to do is keep this in-house because I want to be the one that tells everyone else.'”

“It was inspiring. You see someone struggling so hard to tell teammates because he’s worried about what we’re going to think, and we look at it like, ‘Hey, we love you no matter what. We love you no matter who you are. You’re Scott Frantz to us. We don’t care. That moment of him coming out and telling us was powerful.”

Frantz’s teammates­ — all 130 of them — honored his privacy for more than a year.

Risner said that he had no idea that Frantz was gay until he told them.

“Truly, no, because I knew Scott for about a year and a half before that,” Risner said. “I didn’t see one thing. Scott is a normal guy. You don’t notice anything about him.”

Coming out publicly may end up being far more significant than telling his teammates.

By coming out, Frantz is a rarity in college football — an openly gay player, one of only two at the FBS level. His public announcement came several months after Arizona recruit My-King Johnson publicly announced he was gay after his signed with the Wildcats. Missouri’s Michael Sam came out after his playing days ended at Missouri. But Frantz will suit up this season, expected to start at left tackle after playing all 13 games there in 2016 as a redshirt freshman.

Scott Frantz was selected last year by Athlon’s as an All-Big 12 Freshman and earned a selection to USA Today’s All-Bowl team.

But Frantz was certainly the talk of the Wildcats during Snyder’s initial press conference with the media.

Snyder said Frantz was pragmatic about his decision to go public. Earlier this year Frantz came to Snyder and talked to him about his desire to make a public statement. The two had several discussions about it, with Snyder counseling Frantz about the impact that a public statement could make. Certainly, by going public, he would be subject to conversation and criticism from fans, students, faculty, administration and social media.

Once Scott Frantz made the decision to make the statement, that led to the interview on SportsCenter with Rowe, a long-time sideline reporter for Big 12 games. It was Frantz’s decision to go public, but Snyder felt comfortable with the decision because of Frantz’s reasons for doing so.

“Number two, he wanted the opportunity to feel free to live his life as he would like to do so, and he felt hindered prior to that being able to do so. I appreciated those things because I thought they were meaningful.”

Risner saw the difference in Frantz shortly after the SportsCenter feature.

“He was telling me just how happy he was that he could just be himself, just be Scott Frantz, and I think that’s awesome,” Risner said.

Inevitably, Frantz’s announcement may make it easier for other active college football players to go public with their homosexuality, if they choose. Risner said that, in his view, the reaction to Frantz’s announcement has been extremely positive on campus and on social media. Risner said that he checked Frantz’ social media feeds after the announcement and estimated that about 95 percent of the reaction was positive. But he also knows that criticism is likely to come with his statement.

“I’m sure I’ll be hearing more and more things and I’m sure some of those things will be negative, but at the end of the day Scott’s main purpose is to make an impact on others that are going through the same thing he went through and that’s all that matters,” Risner said.

Snyder agreed, saying that the quality of person that Frantz is will allow him to handle what is ahead and allow him to serve as a role model for those who face the same decision.

“My guess is that, if a young person is a good young person, (I would say) not to have fear to be able to do that (come out),” Snyder said. “I mean, it wasn’t their — I mean, they didn’t create that in themselves. So people will be accepting, I think.”