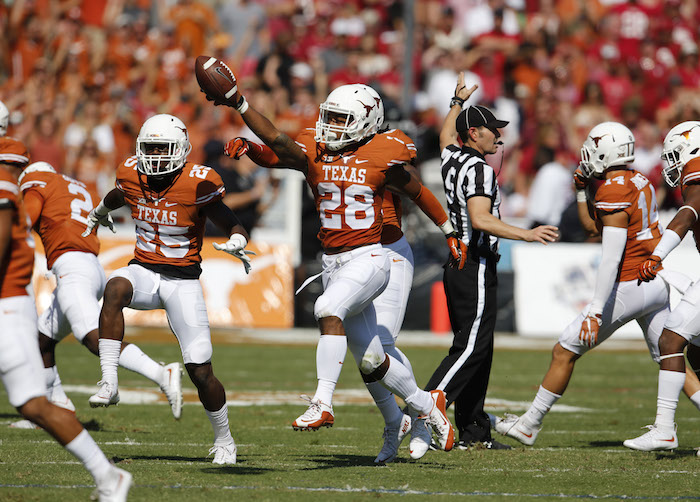 Kirk Johnson came to the Texas Longhorns as a highly-touted running back out of San Jose, California as part of the Class of 2015. But the injury bug continues to get the best of him.

Some clarity from Texas about RB Kirk Johnson. He did start practice today but didn’t finish due to a hamstring issue.

It’s even more disappointing to hear this news when you realize how much emphasis new head coach Tom Herman has put on hydration to avoid these kind of soft-tissue injuries. But it’s another setback for Johnson who has spent the majority of his time on the 40 Acres with injuries. He played in six games a a freshman, getting 8 carries for 44 yards, while also spending time on special teams as a kick returner. But in November, he suffered a knee injury and missed the rest of the season, along with spring practice in 2016.

Last September, Kirk Johnson underwent knee surgery on a meniscus tear. He was expected to be a change of pace back for the Longhorns to the power-running styles of D’Onta Foreman and Chris Warren.

Johnson’s injuries date back to high school when he suffered a serious ankle injury his junior year.

This latest setback is more bad news for a Longhorns backfield that has been unable to stay healthy the past several months. Chris Warren missed spring practice with a hamstring injury, while Toneil Carter and Kyle Porter both had slight ankle sprains, and Johnson missed time too.

While Shane Buechele has received plenty of praise for his offseason growth, he needs at least a couple of healthy bodies to hand the ball off to this fall.

Podcast: Where do the Big 12 coaches rank among Power 5?
Tom Herman cucks reporters by attempting to control social media use
To Top