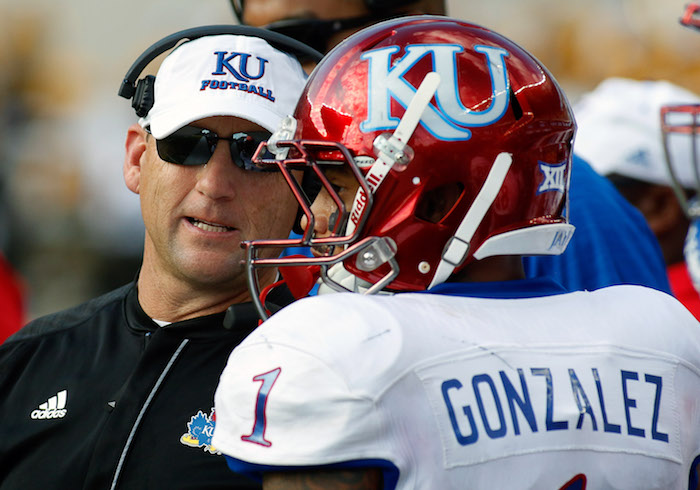 If we’re being honest, the Kansas Jayhawks are still likely going to finish in last place in the Big 12 this fall. But there is plenty of reason for optimism, by KU standards, thanks to what David Beaty is building heading into the 2017. Unfortunately, some of those positive vibes took a blow this week when the University announced that wide receiver LaQuvionte Gonzalez had been dismissed from the football program for an unspecified violation of team rules.

While the explanation was vague, and we’ll likely never know the specific details of what went down, there’s no denying Gonzalez’s talent and abilities and what they brought to the Jayhawks in 2016. The former 4-star prospect originally attended Texas A&M as part of the Class of 2013 before joining David Beaty’s program as a transfer. After reeling in just 26 catches over two seasons in College Station, Gonzalez sat out in 2015, per transfer rules, and then caught 62 passes last season for over 700 yards, with 3 touchdowns.

In addition to being in the top 10 in the Big 12 conference with 5.2 receptions per game, Gonzalez was 6th in the conference in kick return average (21.5). He was also 7th in the Big 12 in all purpose yards, behind the likes of Joe Mixon, D’Onta Foreman and Kyle Hicks, but ahead of names such as James Washington and KD Cannon.

Practice gets underway today for the Jayhawks, and while coach Beaty may try to downplay the loss of Gonzalez, it’s clearly a big one for this team and this offense. A new coordinator is in town in Doug Meacham and a new quarterback is likely to take over in Peyton Bender. Whether you want to admit it or not, losing a player who should have been one of the best receivers in the Big 12 stings.

But if you want to take the most optimistic approach for this year’s Kansas Jayhawks, here you go: Technically, LaQuvionte Gonzalez was not the team’s top receiver last season. That was Steven Sims, who had 72 catches for 859 yards and seven touchdowns. Also, there are high expectations for Daylon Charlot, who sat out last season after transferring from Alabama to Kansas. Charlot is a similar physical mold to Gonzalez at 6′, 177 pounds, and was a 4-star recruit from Louisiana in the Class of 2015, who held offers from LSU, Mississippi State and Notre Dame. He only had two catches in his one season in Tuscaloosa, but he will get a chance to prove himself right away in Lawrence.

Another name to keep an eye on is JUCO transfer Kerr Johnson Jr., who was in camp for spring practice and while he’s listed at 5’10”, 180 pounds, David Beaty believes his wingspan is closer to that of a 6’4” person. His speed is his second-biggest strength, which can come in plenty handy in Kansas’ Air Raid offense.

So while Sims, Charlot and Johnson should be a trio to help lead the Kansas wide receivers, and the team is hoping for contributions from guys like Jeremiah Booker, Tyler Patrick, Chase Harrell and Ryan Schadler, the reality is you can never have enough pass catchers in Doug Meacham’s offense. And losing one of your team’s, and the Big 12’s, best in LaQuvionte Gonzalez was not the way David Beaty wanted to kick off his third fall camp in Lawrence.

Beaty’s job is hard enough. This is the last thing he needed.