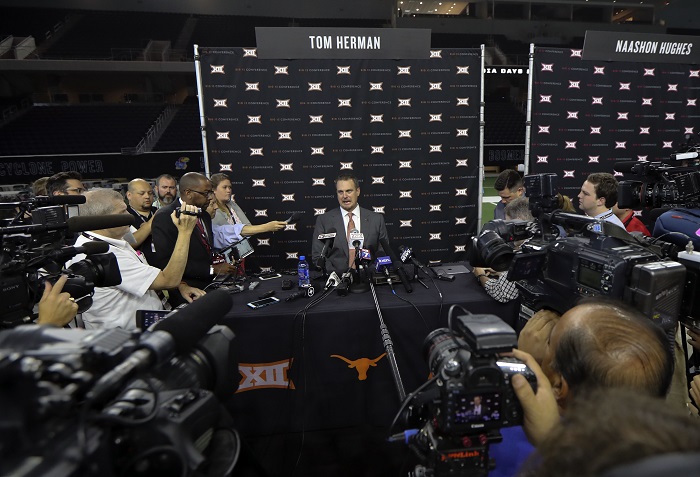 As Day Two of Big 12 media days unfolded in Frisco, Texas, Tom Herman seemed at ease. When the breakout sessions got underway in the afternoon and media members could choose who they wanted to get up close and personal with their interview subject of choice, Tom Herman naturally drew the largest crowd. He’s the new head coach at powerhouse Texas and the latest guy in charge of trying to bring a championship mentality back to Austin.

Herman was intense, but tried to schmooze the media as best he could. He attempted to insert some one-liners here and there, even specifically calling out certain media members that he knew by name. After David Ubben, who used to cover the Big 12 for ESPN and FOX Sports, fired off a question to Herman, the head coach looked over, smiled, and yelled, “Ubbs! Good to see you bro, where are you working now?!” Ubben told him, Sports on Earth, and the conversation continued.

It was all strategic. Many of these coaches understand there’s a value in having a friendly relationship with folks in the media. The media doesn’t call the shots, but hell, it never hurts to have ’em on your side. Even Tom Herman knows that.

But eventually, everyone shows their true colors. Tom Herman is a well noted control freak. His latest decision is evidence of that. And it didn’t even take until a losing streak for us to really see it.

Here is the newest policy that Texas Longhorns media members were surprised with on Wednesday:

“Going forward, our policy for media members attending post-practice availabilities will be that social media posts will not be permitted during those sessions. Any social media entry should come after the conclusion of all post-practice media interviews have concluded. Our hope is that you would take time to review your post and re-listen to the questions and answers in an effort to increase accuracy and insure the necessary context in each of your social media reports. We hope this will not only allow everyone more time to craft those commentaries/reports, but also allow necessary time to absorb full context. It will also be beneficial in providing full attention to follow-up questions or the next line of questioning during the actual interviews. Thank you in advance for adhering to this policy.

Also, to follow up on a concern that came up today during post-practice availability. Please do not stand behind Coach Herman or the players during the availabilities. The ropes are in place as a guide to avoid that and to allow the subject to address the group. To assist you with your recording devices, we will add a table for you to place those on going forward.”

GTFO. This in unbelievable!

Don’t forget, I am the one who got Herman longing for the good old days in terms of media use, when I reported his camp had had conversations with Baylor.

If you think this decision was driven by anyone other than Herman, I’ve got a bridge to sell you. While spokesman John Bianco did confirm breaking news (player injury) can be tweeted immediately, that’s about it. No one can tweet quotes or comments made by Herman because the media needs to “insure the necessary context.” Basically, in Tom Herman’s opinion, the media generally sucks at their job, so he needs to help them be better.

This is an awful way for a big-time college football coach to begin his relationship with local media before even coaching his first game.

In this day and age of “fake news” (insert my Trump voice) and a time when it’s sometimes better to be first than accurate, I understand things can be wrong or taken out of context. But the idea that a coach and university are going to literally control when media can send out a message is ridiculous. If any team tried to pull this stunt in a media market based on pro teams (Philadelphia, New York, Boston), they’d be ridiculed and laughed at by every media member and fan on talk radio.

While Austin, Texas is a much bigger media market than say, Ames, Iowa or Waco, Texas, it’s not New York City or Boston. There is still a smaller, family-oriented feel amongst the media members, and a relationship with coaches that, if the game with the media is played right, can sometimes buy them a longer leash than they may deserve. Mack Brown knew how to play it to perfection.

You want to tell me Nick Saban can be a jerk to media? Urban Meyer too? Sure. But guess what? Even those guys haven’t tried to tell the media when they can report their message. And those guys have won multiple national championships. Tom Herman hasn’t coached one game at the Power 5 level (head coach, not coordinator).

If Tom Herman thinks his quotes have been misconstrued over his first few months in Austin, maybe it’s in regards to what happened at the Texas High School Coaches Clinic a couple weeks back, that’s on him. Pick and choose your words more carefully.

It’s not the media’s job to try and sugarcoat what your saying and give it the most pro-Texas spin possible.

Unfortunately, the only local media member I’ve seen vocally speak out against this silly policy is Anwar Richardson of OrangeBloods. Kudos to him. The rest have gotten in line like the cucks that they apparently are, as they don’t want to ruffle anyone’s feathers in Austin. What a shame.

As for the second half of the request, I could see where it’s annoying to have some media members with their recorders standing on the side of you at a 45-degree angle reaching their arms around trying to get the latest sound bytes. But guess what, that’s what being the head coach at Texas is all about. Don’t like media swarming your space? Then Houston was a good fit. Maybe Herman should’ve stayed in the AAC. Hell, they were offering a big salary as well.

As for not standing behind Herman, it’s time for these no-good, plebeian reporters to stand in front of their master, say yes sir, may I have another sir, and listen to their true Daddy, coach Thomas Herman.