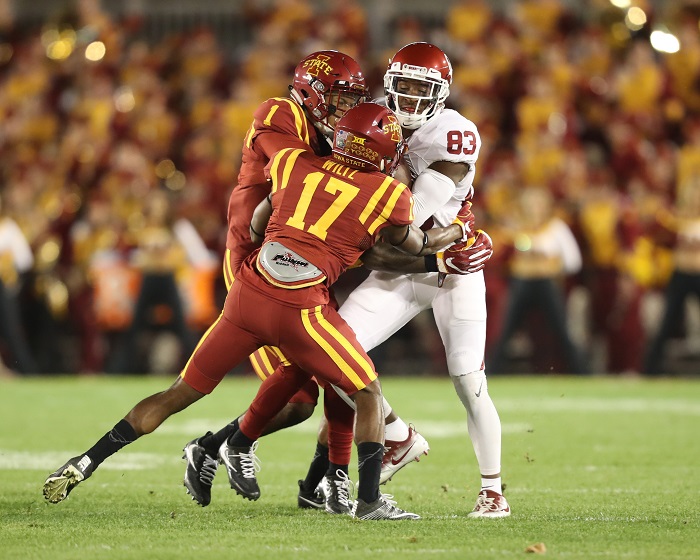 With the Sooners looking to find some new go-to players at wide receiver this fall, Nick Basquine won’t be one of them. Lincoln Riley announced on Saturday that Basquine will miss the entire 2017 season with an Achilles injury.

Basquine also confirmed the news on Twitter and remained optimistic about his future:

Thank you for the well wishes. I’m leaning on my faith, family, friends, and teammates to get through this. I’ll be back better than ever.

Last season Basquine had 20 catches for 265 yards and two touchdowns. Quarterback Baker Mayfield called Basquine one of the hardest workers in the program and added the wide receiver would have been a starter and a “huge” part of the Oklahoma offense.

Head coach Lincoln Riley confirmed the news on Saturday and addressed who may step up, saying, “Mykel [Jones] will be option one there. He’s had a really productive camp so far… we’ve got some options. We’re still look at guys like Lee Morris, a guy that’s a walk-on from Allen [Texas] and has really done a great job here behind the scenes and has played in a few games for us. Lee has had a really good camp, we think he can go in there and be one of those top 4 or 5 guys at the inside receiver rotation.”

Riley went on saying, “Charleston Rambo is another interesting guy. We’re looking at him at a few different positions right now and trying to figure out where best to use him. I think he’s another potential option as well.”

Morris is a redshirt sophomore and has yet to make a catch at the college level. Meantime, Rambo is a freshman from Cedar Hill, Texas, who was a four-star recruit and a top-30 recruit in the state of Texas.

Regardless, the Sooners have a lot of depth, but unproven commodities at wide receiver, so this one is going to sting a bit for the offense.