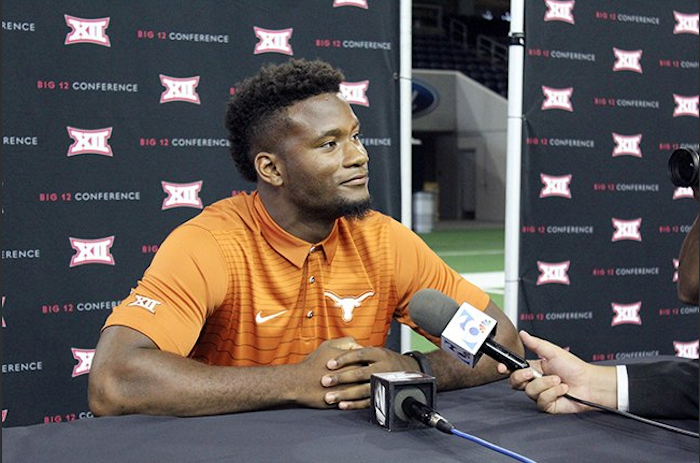 Surely you saw the unveiling of the Texas football locker rooms last week? You couldn’t have missed it. As you might expect the Longhorns made it quite the production.

This is the NEW Texas. #HookEm pic.twitter.com/rAxLxV8fwk

Some of the players looked absolutely gobsmacked.

Find yourself someone who looks at you the way Kris Boyd looks at the new locker rooms. (Via @TexasFootball) pic.twitter.com/VSqiCkN1ht

BurntOrangeNation.com reported that each locker cost nearly $10,000 and featured 43-inch touch screens with player highlights and bios in case, you know, players forget who they are.

Yes, it’s ridiculous. But this is also Texas, and this offseason has been all about restoring the luster to a Longhorns program that hasn’t had a winning season since Mack Brown retired after the 2013 season.

“It’s frustrating because it’s hard to explain to the younger guys,” Longhorns linebacker Naashon Hughes said at Big 12 Media Days. “You’re not supposed to be at home for Christmas. They’ve (younger players) never been there (a bowl game) and they’re eager to get there.”

When Tom Herman arrived for Big 12 Media Days, he ticked off the things he wanted to accomplish in the offseason — facility upgrades, social media upgrades, player attitude upgrades. He received all of them, he says, after signing a five-year, $28.75 million contract to replace Charlie Strong.

But if the future is going to get brighter in Austin, one big thing must change. Texas must again become the place to be when it comes to college football. When Herman served as a graduate assistant to former Texas Mack Brown early in Brown’s tenure, Brown succeeded in doing just that, quickly snagging the nation’s No. 1 offensive recruit (Phil Simms) and defensive recruit (Cory Redding). Herman said the upgrades were necessary to fulfill that vision.

“Our recruiting and social media staff have done an excellent job this first eight months on the job, in terms of kind of rebranding Texas football a little bit and making sure we are one of the really cool places to come and to get your education at and to play football,” Herman said.

That bodes well for the future, but there is some present to sort out. During his first meeting with his new players Herman asked how many had been to a bowl game. Three players raised their hands, including Naashon Hughes. The others were defensive back Antwuan Davis and kicker Mitchell Becker. All three were redshirts that season, as the Longhorns sent Brown out with an 8-5 record.

The following three seasons Strong and his staff were successful in recruiting talent, but not translating that talent into success to the field. The Longhorns went 16-21 in three years under Strong, losing a bowl game his first year in 2014. The Longhorns’ road loss to Kansas last season seemed to seal Strong’s fate, as his firing gave way to Herman.

Herman didn’t go so far as to strip his new players of their “Longhorns,” as Texas Tech head coach Kliff Kingsbury stripped his players of their “Double T’s” this offseason. But he did insist on an upgrade in facilities. Along with the locker rooms, the practice facility is getting additional upgrades to be more attractive to recruits and Royal Memorial Stadium is getting a new videoboard, the fourth-largest in college football.

Herman says its necessary, likening the upgrade to the top-notch facilities Texas had when he arrived nearly two decades ago under Brown. Naashon Hughes said that when he visited in 2012 Oregon was the one school he knew of that had heavily invested in facilities. Now everyone is doing it, to the point where Kansas — yes, the Jayhawks — committed $300 million in facility upgrades for football this summer.

Hughes said there have been construction workers around the facility practically every day since Herman arrived, a proper allegory for the construction job Herman is trying to work with this roster.

“It helps us a lot because with the renovations things do get better,” Hughes said. “Where there wasn’t new equipment or technologies, we don’t have to worry about that anymore. Things like recovery ice baths are easier if you have better technology to work with.”

The reconstruction has extended to the training table, too. During spring workouts there were “winners” and “losers” each day. When players came back to the facility the next day, the winners received a solid breakfast. The losers, well, let’s just say no one wanted to be a loser after they saw the menu.

“The food was so bad when you lost,” Hughes said. “It looked cooked from far away but when you get there you realize there’s still a little batter that’s uncooked (in the pancakes). Then there’s the grits. I’ve never seen watered grits like that. They were loose. Then you had burnt biscuits and bacon. Basically, any regular breakfast food you can think of and then think of it at its worst.”

Herman’s goal — with the food and everything else this spring — was to make losing a vomit-inducing thought. Hughes said that thought extended to academics, off-the-field activities and even team-building activities like bowling, as even non-avid bowlers competed to throw strikes. Hughes said he wasn’t much of a bowler, but that wasn’t the point. The attitude adjustment was the point.

And it wasn’t a hard sell. Naashon Hughes rattled off the players on the defensive side of the ball that he said got better this offseason, and it was a long list. Some were starters, like linebacker Malik Jefferson. Some were backups who are expected to compete for starting time. New defensive coordinator Todd Orlando told his players that as the linebacker group goes, so goes this offense. So there is plenty of pressure on Hughes, Jefferson and the other linebackers to not only play well but bolster that attitude throughout the rest of the team.

“With this new staff and the 5-7 teams of the past there’s been no resistance to what coaches have had to say because we came from 5-7,” Hughes said. “There was no need to argue. Everyone was on board.”

On board is one thing. Translating that to on-field success in 2017 is another. Herman said he was happy with the foundation his team built in the spring and summer. The period of Texas upheaval seems to be over. He made the point at media days that the jobs of university president, athletic director and head football coach have all turned over in the past four years, and in some cases twice.

Now stability must turn into success, and it can’t come soon enough for Herman, who is busy recruiting a 2018 class that is among the best in the nation, but may sour a bit if the Longhorns don’t show progress this season.

“The Texas they know is a lot different than the Texas that people in my generation know,” Herman said. “So it’s our job to show them what Texas is capable of, what Texas has been in the past, and what we’re planning on being in the future.”