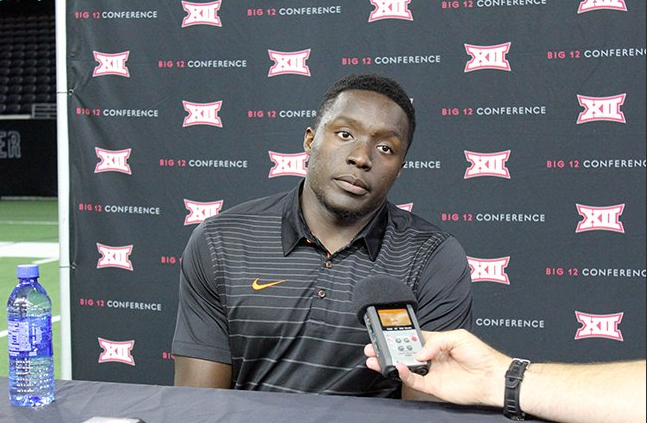 So late on Thursday night, the boys at Pardon My Take tweeted out (since deleted) that James Washington was going to miss time with an injury. The exact tweet read:

BREAKING – Ok St WR James Washington suffered a hernia injury, will miss the first 4 games of the season at least. Must credit @pardonmytake

Well, Cowboys Nation went into a frenzy into the early morning hours. But then the tweet was no where to be found after Pardon My Take was accused of reporting “fake news.”

An Oklahoma State fan account even had a back and forth with the Pardon My Take guys on Twitter’s direct message:

Waking up and still no one has confirmed anything…. pic.twitter.com/hzXHBkv738

Everyone woke up on Friday and still was concerned, anxious and had no more information on what exactly had happened to James Washington, if anything.

Some clarity came down on late Friday morning in the form of Lauren Rew of The Franchise in Tulsa.

Re @PardonMyTake, source tells me James Washington had ab pain; ultrasound discovered old hernia. No surgery now, will try to play thru it.

So, the guys at Pardon My Take got spooked by Oklahoma State fans and pulled down their tweet. But it does turn out that they were right, sort of. Washington is reportedly dealing with a hernia injury, but will try to play through it.

Frankly, if it was up to me, I’d have James Washington get the surgery now and miss 4 games, if it means he’s back and healthy by October. With their depth at wide receiver, Oklahoma State should be 3-0 after the non-conference slate, and while TCU can be tough, it’s at home and they should win it.

I’d want to make sure Washington is totally healthy for the Texas, West Virginia, Oklahoma stretch. My concern is that this injury lingers and instead of having him miss 4 games and then be healthy, we will only see a 75% healthy Washington for the entire season. That would be a shame.