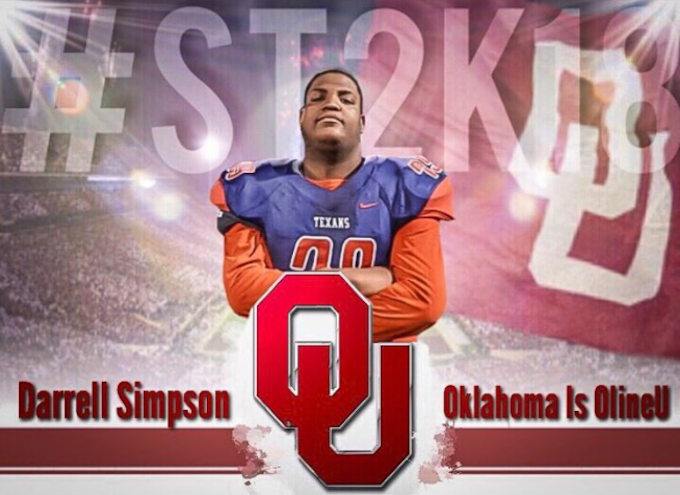 While the college football season typically lasts only a little over 4 months, there is one thing that never stops: recruiting.

This is the one aspect of the college football game that is 24/7, 365 days of the year. To simply put it, there is no offseason for recruiting (outside of a couple dead periods). A commitment can happen at any place or any time of the day. Recruiting has become almost bigger than the game itself sometimes and as social media continues to cross paths in recruiting, the fans get more involved as well.

Just like how the cowboys traveled on the old dusty trail, the recruiting trail can be just as bumpy and harsh (of course, depending on who you root for). It’s time to circle the wagons folks and grab a seat by the campfire because the Big 12 Recruiting Roundup is here. This is a place to check out how your team is doing on the recruiting trail as well as how they stack up against their conference foes. Whether you want to just check on your team or take a gander over at the competition, there is always room for you at the Recruiting Roundup. This will be a bi-monthly series covering the commitments from the beginning of the month to the 15th on our mid-month roundup and following it up by tracking the commitments from the 15th to the end of the month in our ending month roundup.

In a down year of talent in the trenches by Texas High School football standards, Keondre Couburn was a must get for the Horns. At 6’1, Keondre is a bit shorter than most division one defensive tackles but that doesn’t affect his talent on the field. He does a good job using his low leverage and really getting under offensive lineman, pushing them off to find the football. Keondre is will be a nice gap stuffer in the running game to really disrupt offenses trying to run the football. With his height, keep in mind that current Texas DT standout Poona Ford who is 5’11, has a similar playing style as Keondre. I will say that Keondre will need to shed some weight to get his body to a good playing weight for his height.

At 6’5.5, Malcolm Epps has the length of an NFL tight end. However, his build right now looks more like a wide receiver than a true tight end but that will change with some time in a collegiate strength program. Malcolm has a basketball background which shows on his film because he is a very athletic for his size. What sticks to me is his pass catching abilities. He can high point the football before anyone else can get close to touching it, essentially plucking it right out of the air. The only real unknown about Malcolm is his run blocking skills. There wasn’t a lot of film of him blocking but when he adds weight and with some good coaching, this can be smoothened out due to his size. I was able to catch up with Malcolm to talk about his commitment to Texas.

HCS: What made you decide that Texas was the right school for you and what stood out about them from the other schools that recruited you?

Malcolm: “It just felt right. It was the best school not only for me but also my family.”

HCS: How do feel about your fit in this new offense?

Malcolm: “Great! They use the tight end in so many ways.”

HCS: What are your thoughts about this 2018 class for Texas and is there anyone else that you are trying to get on board?

Malcolm: “I want anybody that wants to be a Longhorn and we have the best class of 2018.”

Darrell Simpson is a mountain of a man, my goodness. Don’t let his size fool you though because he can move quite well for his size. He has all the tools of a star offensive tackle and you aren’t going to find many guys his size that can move as well as he does. Darrell shows power and strength on film in the run game as well. Oklahoma continues to build a bright future on the offensive line and Darrell Simpson will be part of it when he arrives in Norman. I can’t say enough good things about Darrell Simpson and the Sooners should be thrilled about his commitment. I had the chance to speak with Darrell about his commitment after his decision.

HCS: What made you decide that Oklahoma was the best place for you?

Darrell: “It was a tough decision. I prayed about it and it felt right and my family is back in Oklahoma. I will still feel like I am at home even though my parents and sister will be in Fort Worth.”

HCS: What are your thoughts about playing for a young head coach like Lincoln Riley? Did the coaching change from Bob to Lincoln have any impact on your decision?

Darrell: “Coach Riley and coach Bedenbaugh (Offensive line coach) have been recruiting me since 9th grade so it did not make a difference. He (Lincoln Riley) will add his flavor to the squad and he has not changed towards recruits just because he is the head coach. There is no interruption due to the change of coaches.”

TCU has found another electrifying receiver to add to their arsenal with Tevailance Hunt. He possesses great speed and he has another gear with the football in his hands. I feel like Tevailance is a very complete wide receiver who does everything well on the field. I don’t see anything that he lacks, if anything he can add some weight to his frame which he should be able to do when he steps on campus. Tevailance Hunt should be rated a lot higher in my opinion and I think he has the capability of seeing some early playing time for the 2018 season for TCU.

There was an interesting battle for 3-star APB Ta’Zhawn Henry. It came down between TCU and Iowa State, which is not something you will see very often. Ta’Zhawn is a shifty back who can stretch the field on the outside. Due to his size, you won’t see him carry it between the tackles much but I think down the road he may have that capability to improve in that area. Where he excels most is in the passing game as a receiver. TCU likes to use these types of guys who can carry the football and catch it out of the backfield as well. I think this is a good fit for Ta’Zhawn to go to TCU.

I found it very interesting that Baylor would get an all-purpose back in their new offense but Craig might be able to add another dimension to it. Baylor is going to be more of a pro-style offense that will feature spread concepts. Craig William’s job will be getting the football on the edge and finding the open crease to burst through. About that burst, is a 4.36-40 time fast enough? Because that is what he ran at the opening in Houston. Combine this with his good vision and I think Baylor has found a new weapon to play with in the future. He will need to put some weight on but with his skill set, Baylor will have a chance to get creative to get him the football.

This one is a bit of a head scratcher to me, but in a good way if that makes sense. Jason Taylor is listed as a safety and while yes, I do see a unique skill set, I think he is better suited at wide receiver. He shows an ability like few have to go get the football at its highest point. Even when he is playing defense he looks like a receiver catching the football. He has a special talent for finding the football and just simply making a play which is why the Cowboys want his ball skills at safety. I honestly don’t think you can go wrong either way but I could see Jason as an all-conference player down the road either at receiver or at safety. This is a classic case of a three-star guy who provides four or five-star talent at the right fit.

You aren’t going to see many tough running backs like Devin Brumfield committed to Big 12 schools in this cycle. Devin is a very physical runner who rarely will go down on first contact. He isn’t going to necessarily blow by you with his speed but good luck to corners trying to bring him down alone. This is an excellent take for Tech. I think they have found a guy who can run inside the tackles to compliment a speedy back who can stretch the field. This is by far my favorite running back the Red Raiders have committed in a while.

It appears Texas Tech has tried to find their “lightning” to Devin Brumfield’s “thunder”. Garland is a true scat back. You aren’t going to see him running inside but you will see a lot of outside zone runs with him. What makes Garland different than most running backs is that he can probably line up in the slot too. The one thing he does need is to add some weight. He is very light right now and he could use some time to fill out some before he is ready to take some hits.

Randy Fields is one of those guys who does everything well but doesn’t do one thing great. When I watch his film, he does everything nicely and he looks like he will be a reliable option. He isn’t going to be a guy who is necessarily a burner but he will be more of a chain mover at the next level. This was a difficult film for me to really get a grasp of his skills.

The Jayhawks have not had any recent commitments for the 2018 class. Please be sure to check out our next Recruiting Roundup at the end of the month to see if they have gotten anyone else on board for me to break down.

The Cyclones have not had any recent commitments for the 2018 class. Please be sure to check out our next Recruiting Roundup at the end of the month to see if they have gotten anyone else on board for me to break down.

The Wildcats have not had any recent commitments for the 2018 class. Please be sure to check out our next Recruiting Roundup at the end of the month to see if they have gotten anyone else on board for me to break down.