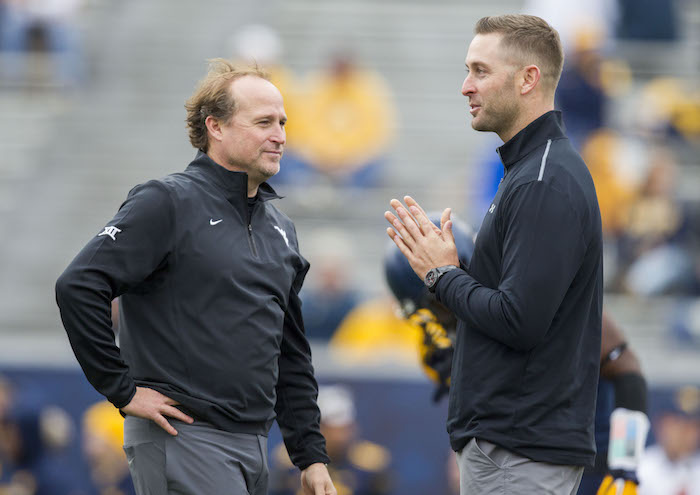 The season is unofficially 10 days away from its “soft open” the weekend of August 26th. Frankly, I’m on pins and needles waiting for the season to officially get here. So since I’ve only looking over the Big 12 schedule about 156 times, I figured I’d give you my list of each Big 12 game on Week 1 and my level of excitement from 10 to 1, meaning the game I am least excited about up to the game I am most excited about.

Jackson State is a garbage FCS team that went 3-8 last season. Kenny Hill will do his thing and look like a Heisman contender, because that’s what Kenny Hill does against really bad football teams. The starters will play until halftime (if that) and TCU will have its way. Since Jackson State is at such a massive disadvantage here, there really are no interesting storylines to speak of in this one. It’s a nice warm up for the Horned Frogs before Arkansas in Week 2.

These two teams played to open the 2014 season and Kansas won 34-28. The game has some intriguing because it will be interesting to see where exactly this Jayhawks team is. If they struggle, then it’s just another season starting as part of a seemingly never-ending rebuild in Lawrence. But if David Beaty’s group comes out and tears up the Redhawks, then maybe this is the year things begin turning around with a couple of Big 12 conference victories. Also it will possibly be the first time seeing new QB Peyton Bender (if he can beat out Carter Stanley), along with getting a feel for what Doug Mecham can do for this offense. The Redhawks are another struggling FCS program that went 3-8 last year, so hopefully this isn’t in anyway a close game for KU.

Nothing to really see here. The most fascinating part of this game will be where Bill Snyder spends his time. Does he make it to the sidelines or is he upstairs in the booth the whole game? My money is on him being upstairs. The Bears are another FCS program, but at least they’re pretty good, going 10-3 in the 2016 campaign.

Ho hum with another FCS opening on the opening week schedule for the Big 12 conference. But hey, it’s Matt Rhule’s first game as head coach at Baylor. Who is his starting quarterback? Charlie Brewer? Anu Solomon? Zach Smith? Will we see all three? Liberty is an average team out of the Big South, a middle of the pack FCS conference. But Baylor should be able to win this one with ease. Keep an eye on the offensive line. If there are any struggles against Liberty, you know the Bears could be in for a long season.

UTEP is typically always good for having a Big 12 opponent on its schedule. These two teams played back in 2012 in El, Paso. Once again, the most interesting part of this game is the fact that it’s Lincoln Riley’s first game as the head coach in Norman. Outside of that, expect the starters to be done by halftime, the playbook to be very vanilla thanks to Ohio State coming up in Week 2 and a final score reading something like: Oklahoma 41, UTEP 17.

This game will be a brutal reminder of the first game under Matt Campbell last season which ended in a Northern Iowa 25-20 victory. Granted Northern Iowa was the 5th ranked FCS team in the country to start the season, but finished a disappointing 5-6. In this year’s preseason rankings, Northern Iowa is ranked #20. But more importantly it’s a statement game for Matt Campbell to show that the culture from Year 1 to Year 2 really has changed drastically in Ames. Everything we’ve heard so far this offseason and at Big 12 media days, that is certainly been the case. But now it’s time to prove it on the field ahead of their biggest rival the following week in the Hawkeyes.

Alright so we have another FCS opponent, but this time it’s a quality program in Eastern Washington. The Eagles have won four of the last five Big Sky Conference titles, including in 2016. Kliff Kingsbury is on the hot seat and his opening few weeks are not easy. Tech plays EWU, Arizona State, Houston and then Oklahoma State. Not brutal, but far from easy. If Tech doesn’t win their game against the Eagles, this season could begin unraveling before it even begins. Also we will get a first look at a defense that is hopefully, for Kingsbury’s sake, finally respectable. Remember this Eastern Washington team beat Washington State to open up their 2016 season, so they are legit. Hopefully Tech doesn’t suffer a similar fate.

We get our first look at the Longhorns under Tom Herman. Is this team really a completely different animal under Herman? We’ve heard plenty about how the workout rountines are better, guys are stronger and faster, and more hydrated. Plus, who is the starting quarterback? There’s so much intrigue and they will be playing a Maryland team that could surprise some people this fall. Win or lose, it will be more about seeing if the attitude and the vibes around the Longhorns really have changed as much as Tom Herman has been telling us for the past six months. I take that back, a loss would be very disappointing for Herman in this one after all the offseason hype.

First off, this game stands alone on a Thursday night. That automatically shoots it up the list. On top of that, it’s a pair of teams that won 10 games in 2016. Phil Montgomery has himself a fine-tuned machine that returns three all-conference offensive linemen, which means plenty of chances for 1,400-yard rusher D’Angelo Brewer. How will the Oklahoma State defense handle Montgomery’s offense? It’ll be a good test for the Cowboys defense, as the Tulsa offense is similar to ones they will see in Big 12 play. Oklahoma State has enormous expectations, which includes winning the Big 12 conference, and is finally getting some national love to make the College Football Playoff. There can be no “Central Michigan game” this year. This team has to knock out Tulsa as early as they can and move on.

This is, by far, the Big 12 game of the week. The Mountaineers trot out their new leader in Will Grier and we will get a chance off the bat to see if he can live up to those expectations against Justin Fuente’s squad. The Mountaineers are loaded at running back, but we will start to find out who steps up as some of his favorite targets at wide receiver. There are some question marks on both lines, but it will be an especially difficult task for the Mountaineers offensive line going up against one of the best defensive lines in the ACC. Justin Fuente led the Hokies to the ACC Coastal title last season, but there are plenty of news faces for Virginia Tech.

The good news for the Mountaineers defense is Justin Fuente lost last year’s top two quarterbacks, three of his top four running backs, three of his top four receiving targets, and two all-conference offensive linemen. This is a relatively nice way to ease in Tony Gibson’s new faces. It’s going to be a must-watch game and could go a long way to defining both team’s seasons.