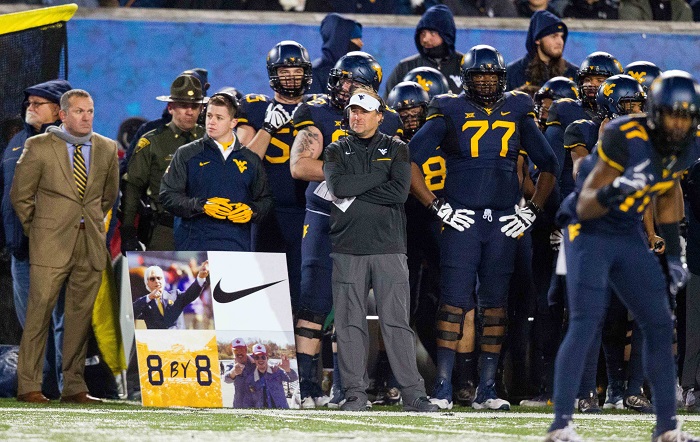 As I try to do as much as I can this time of year (and most times of the year, to be fair), I read an obscene amount of college football and Big 12 related items. I stumbled across this piece by my friend Pete Fiutak, who runs College Football News (and who actually joined our podcast two weeks ago). Pete wrote about the Mountaineers path to the College Football Playoff in 2017, but it was the opening couple of paragraphs that caught my attention, when Fiutak wrote:

“Even with a loss to Oklahoma State, the Mountaineers were still deep in the hunt for the College Football Playoff at 8-1 going into the home showdown against Oklahoma. They lost in a wild 56-28 shootout, but had they won, and if they beat Iowa State and Baylor like they did to finish 11-1 with a Big 12 title, yup – they would’ve been off to lose to Clemson in the Fiesta Bowl.

That’s how close they came to getting into the show, but they didn’t get it done finishing 10-3, closing out with a blowout bowl loss to Miami.”

Wow. That caught my eye. But while I respect the hell out of Fiutak and what he’s built with College Football News, I’ll have to respectfully disagree. Don’t worry Mountaineers fans, you weren’t actually as close as you might think.

Had the Mountaineers beaten Oklahoma, the Sooners would have been a three-loss team. While they would have, in theory, been three quality losses (Houston, Ohio State, West Virginia), it still would not have been looked at as some incredible victory, a la Penn State over Ohio State.

Also, the Mountaineers were home for that game. Once again, it would’ve been an impressive win, but not good enough to launch them into serious playoff discussion.

While we know there is little rhyme or reason to the way the College Football Playoff committee does its rankings on a week-to-week basis,  we can at least get an idea of where things stood. Heading into the WVU-OU game, the Mountaineers were ranked #14 in the Playoff rankings, while the Sooners were #9. The Sooners won the game, picking up a top-15 win, but the rest of the season stayed ranked between 7 and 9.

It’s hard to believe how West Virginia beating #9 would launch them up from #14 into the top 4 over the following weeks, when the rest of the Mountaineers schedule only consisted of Iowa State and Baylor.

When the final playoff rankings were set on December 4th, there were four, count it, four, Big Ten teams ranked in the top 8 (Ohio State, Penn State, Michigan, Wisconsin). While one can argue, and I did, that Penn State should have represented the Big Ten in the College Football Playoff (it beat Ohio State and won the conference title), a one-loss West Virginia team would not have unseated Penn State or Ohio State. No chance.

Meantime, don’t forget Washington was coming off a Pac-12 title and top-ten win over Colorado, beating the Buffaloes by 31 points. It was an impressive stamp to end the season. The lasting impression for the Playoff committee from West Virginia was a gritty three-point win over a Baylor team that ended the regular season with six-straight losses.

The Mountaineers made a good effort in scheduling their non-conference, but it didn’t pan out well. Despite a couple of wins, Missouri ended up being a disappointing football team, and BYU was just average. Meantime, their schedule ended, as we previously noted, with Iowa State and Baylor. Just look back to the first year of the College Football Playoff in 2014, and TCU smoked Iowa State 55-3 on the final weekend, but no one noticed (or cared) because it was Championship Saturday. The Big 12 has generally gotten overlooked on Championship Saturday. That would have absolutely played a factor.

Reason 5: WVU is not a blue blood

The Big 12 has been battling its own perception issue. For a team like West Virginia, it’s even tougher. Its not a blue blood and there was no conference title game to impress at season’s end.

That being said, 2017 is a new season, and I firmly believe all of college football is undervaluing what the Mountaineers can potentially do this fall. Will ‘Daddy’ Grier can lead this team to a Big 12 title game. From there, who knows?