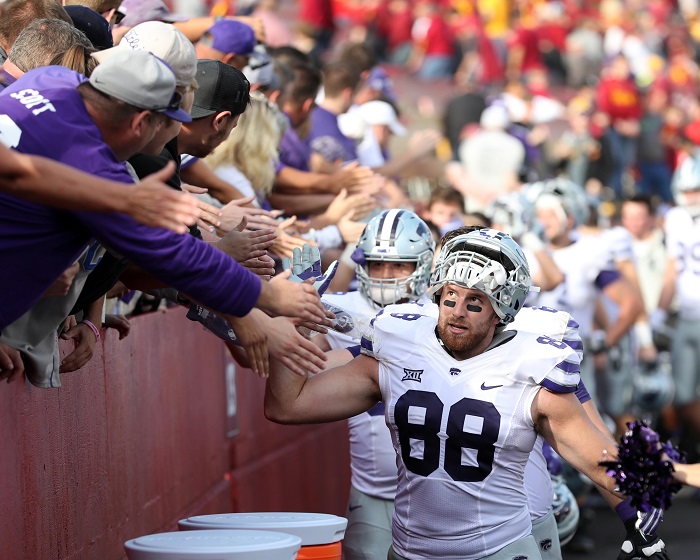 The tight end has emerged in recent years as a real weapon in passing offenses in college football. Take for example Adam Breneman. The UMass senior enters this season as the game’s top returning pass-catching tight end with 70 in 2016. While there is more to being a tight end than catching the football, there has never been a greater emphasis on tight ends making things happen away from the line of scrimmage.

Then there is Dayton Valentine, the junior tight end for Kansas State. He won’t be threatening Breneman for the national lead in receptions for tight ends. He had just two last year, and those are the only two catches of the Baldwin City, Kansas, native’s career. Would Valentine love to catch more passes? Sure, and he may catch more this year. But the focus on catching passes, be believes, misses the true point of his job in the K-State offense.

His job is to make everyone else’s lives — specifically the quarterbacks and running backs — a little easier.

“I think more tight ends should want to be a blocking tight end,” Dayton Valentine said during Big 12 Media Days. “I think it’s fun to put your hand on the ground and be a little nasty with all those guys, be the little guy mixing it up with the rest of the offensive linemen.”

‘Little guy” is a relative term for Valentine, who is listed as 270 pounds on the Wildcats’ fall roster. That’s big to most of the world. But standing next to the rest of the K-State linemen it’s on the small side. For instance, starting tackle Dalton Risner comes in at 300 pounds.

Still, despite just two catches a year ago, Valentine earned Honorable Mention All-Big 12 honors, based almost exclusively on his contributions to the run game. As a blocker, Valentine helped the Wildcats set a school record for rushing yards per carry (5.27), while finishing third all-time in total rushing yards (3,013) and rushing yards per game (23.18) in a single season. The offense’s 39 rushing touchdowns was ninth all-time in K-State history for a single season. That total was also No. 6 in the nation.

Dayton Valentine should start for the Wildcats as they try to extend their streak of seven straight games with 200 yards or more rushing when they open the season Sept. 2 against Central Arkansas. Extending that streak seems like a safe bet.

Not only is most of K-State’s offensive line returning, but so are many of the cogs of last year’s successful run game. The Wildcats were dealt a blow last week when their center, Reid Najvar, decided to forego his senior season due to concussion concerns, but players like Valentine and Risner give the running game a good shot to produce again.

Three of the teams’ top four rushers return from last year — quarterback Jesse Ertz (1,012 yards, 12 touchdowns), running back Justin Silmon (485 yards, 3 touchdowns) and running back Alex Barnes (442 yards, 6 touchdowns). Barnes has the potential to be explosive, as evidenced by his 129-yard, 4-touchdown game against Baylor late last season. Silmon, meanwhile, has 123 yards and 2 touchdowns in the regular-season finale against TCU.

The finishes of those two players, along with K-State’s finish to 2016 — winning six of its last seven games — has Valentine optimistic the Wildcats can actually improve their running game in 2017.

“Watching those guys work every day, yes (I am optimistic),” Valentine said. “They’re freaks in terms of the weight room and in practice. They both (Barnes and Silmon) run so hard. Silmon can juke you and Barnes just runs over you. They’re both very unselfish. Then you have Jesse. We have a backfield by committee and it could be one of the best in the league.”

“We’ve never approached a season any differently, one any differently than another, whether that be right or wrong,” Snyder said. “And the idea that, if you do have a certain number of people returning — which we have a reasonably large number returning, players, starters in the program — it’s not about who you have back or how many you have back, it’s really about how you prepare yourself game by game. That’s the important thing for us.”

Dayton Valentine’s importance to the Wildcats is undeniable, so much so that his teammates voted him a captain in 2017, which is part of the reason he went to Big 12 Media Days. Despite the loss of Najvar and Snyder’s own health scare in the spring, Valentine says these Wildcats are primed to contend.

“This is the closest team I’ve seen and the best chemistry of any locker room I’ve been in,” Valentine said. “This year we see how good we finished last year and our mindset is we have to start where we left off.”

Were the Mountaineers one win from CFB Playoff in 2016?
Mason Rudolph remains inspired by Brady, Manning, Ryan
To Top