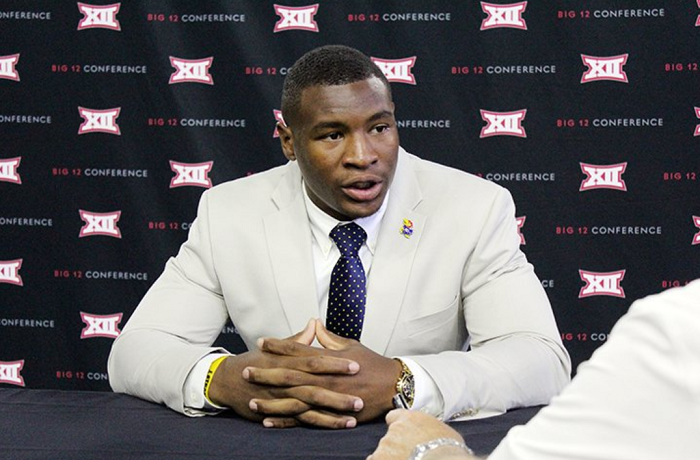 Kansas Jayhawks football is starting to catch on across the Kansas City region! Maybe? Well, it looks like Kauffman Stadium and the Royals have held their “KU Day at the K” for at least a couple of seasons. And on Friday night defensive end Dorance Armstrong Jr. threw out the first pitch prior to the Royals game against the Indians.

It’s these kind of little things that help build a program back up to respectability. It might seem meaningless, but there could have been a budding 14-year-old football star in the crowd on Friday night. And maybe, just maybe, he has a different outlook at on Jayhawks football than he did before the game got underway. Why? Because if he didn’t know Dorance Armstrong Jr., he looks him up and realizes that the preseason Big 12 defensive player of the year plays for the Jayhawks.

It was all part of the Royals’ “KU night” at Kauffman Stadium.

While in years past, there may not have been a ton of optimism around this kind of even at the Royals ballpark, there should be reason to believe things will start to trend in the right direction in Lawrence this fall. Bowl game? Not yet. Especially in a Big 12 that is very sold from top to bottom.

And of course kudos to the Kansas City Royals for supporting their local college teams on multiple levels. Any promotion like this helps the team and program, but is also a nice boost for the community as well.