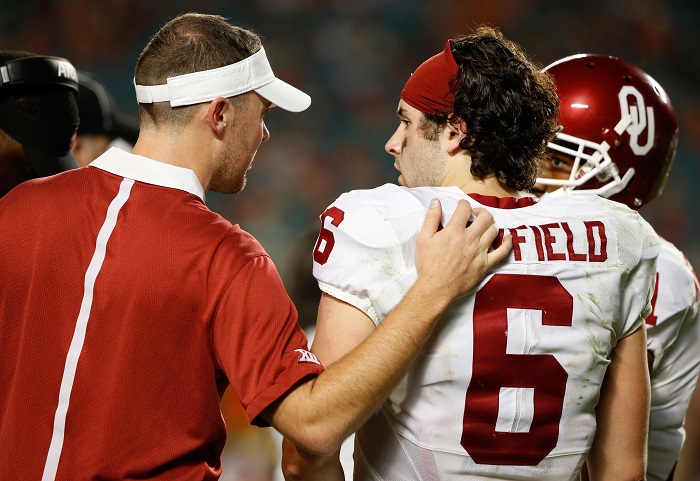 Let’s move onto the Oklahoma Sooners.

This cannot be another three-touchdown loss like last season’s outcome in Norman. If Ohio State ends up winning the Big Ten or being the top 10 team we all expect, a loss won’t automatically preclude Oklahoma from reaching the College Football Playoff. But they have to keep this one close. If not the perception will remain that Oklahoma can win the Big 12, but can’t play with the real “big boys” in college football (Clemson in the 2015 playoff, Ohio State the past two season). Also, not just for themselves, but this is a big game for the entire Big 12 conference. In fact, it’s the most important non-conference game for the Big 12 all season. So if nothing else, just keep it close, OU.

That’s because it comes early for the Sooners. September 30th is the only weekend off for the Sooners during the season and then it’s eight-straight Big 12 conference games with no time off. No coach would plan for his bye week to come in late September, but it is what it is for Lincoln Riley and company. Of course if they make it to the Big 12 championship game it’d be nine-straight games over a nine-week period. Physical or mental fatigue could certainly play a factor for Oklahoma in late-season games against Oklahoma State, TCU and West Virginia.

A new era of the Red River Rivalry

There is so much on the line in this specific Red River Rivalry for so many reasons. Both teams think they can win the Big 12, which means they likely need to win the Red River Rivalry. There are two new head coaches in this match up at the same time for the first time since 1947. They will be competing for not just wins and placement in the standings, but for laying the groundwork for a new rivalry between Lincoln Riley and Tom Herman. They have already been going after each other’s recruits in some cases and whoever wins this game on October 14th will have the bragging rights heading into the recruiting season. This game will help define the begin of how the rivalry will go under new leadership.

No let down against Kansas State

It’s easy to have a let down after what is going to be an incredibly intense and emotional game in the Red River Rivalry. But going to Manhattan is no easy task. It will be the third game away from Norman over a four-week period, which is another tough test for a team to overcome.

Bob Stoops was 6-0 as OU’s head coach at Bill Snyder Family Stadium. Can Lincoln Riley continue that trend? Stoops made it look much easier than it was. But he always seemed to have the number of the his former boss who’s name graces the stadium.

The Sooners could certainly lose to Oklahoma State in Stillwater on November 4th. But if they reach the Big 12 championship game with one loss and end up beating Oklahoma State in a rematch at AT&T Stadium, OU will likely reach the College Football Playoff (my assumption here is that Ohio State is as good as we assume and the Sooners will have won that game in Columbus). Now if OU is a two-loss team heading into the Big 12 title game and Oklahoma State is undefeated, the Pokes may be able to backdoor their way in with a loss to OU. There are many possibilities on this.

The point is as follows: with the addition of the Big 12 championship game, depending how the season plays out for the Sooners, Bedlam on November 4th is not necessarily a “must win.”