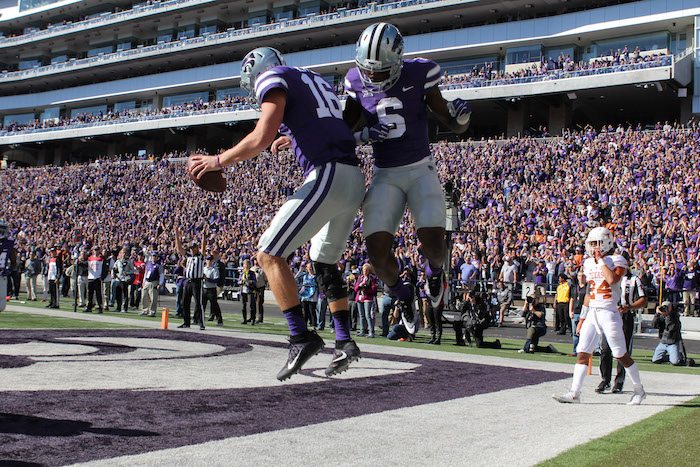 Don’t trip up against Vanderbilt

Derek Mason is slowly starting to turn around this Vanderbilt football program. They went 6-7 last season, including wins over Georgia on the road and Tennessee at home. That being said, it’s still Vanderbilt. Even though this game is on the road and won’t be the cake walk some might’ve thought the game would be a couple years ago, Kansas State can’t go lose to a bottom-tier team in the SEC and legitimately expect to be considered for the College Football Playoff. This is especially important considering Kansas State’s other non-conference games which are a joke: Central Arkansas and Charlotte. So while it’s not that big-time non-conference game, like Auburn in 2014, it’s big enough where the Wildcats have to be able to come out of Nashville with a win next month.

Kansas State enjoys its bye week right after the Vanderbilt game, before having a single Big 12 conference game. So that means nine-straight conference games, followed by potentially a Big 12 championship game, which would be ten games in ten weeks, with not a single soft FCS opponent sprinkled in (cough, SEC, cough). Bill Snyder and his staff has been around the block quite a few times, so they’ll fully know how to handle the rigors of a schedule set up like it is. But anytime you’re starting nine or ten games in a row right in the face, it can understandably be a little daunting.

The Wildcats open up Big 12 play with three-straight games against Texas teams: vs. Baylor, @ Texas, vs. TCU. It’s not the toughest schedule to open, but it’s far from easy. Baylor will be playing its first Big 12 road game under Matt Rhule, Texas has high expectations under new coach Tom Herman and TCU is hoping and planning on a bounce back season. Now here is the good news: Kansas State beat every major FBS program in the state of Texas last season: Baylor, Texas, TCU, Texas Tech and even Texas A&M in the bowl game all lost to the Wildcats. There’s nothing about the Lone Star State that intimidates Bill Snyder.

Get over the Oklahoma hump

No one is happier to see Bob Stoops gone and Lincoln Riley in than Kansas State fans. The Sooners were 6-0 at Bill Snyder Family Stadium under Stoops. But the question remains whether or not Lincoln Riley can channel his inner Stoops when traveling up to Manhattan. The good news is the game is the second of back-to-back home games so travel and freshness should not be an issue for the Wildcats. But considering Kansas State has a tricky late-season match up in Stillwater against Oklahoma State, they have to beat one of the Oklahoma schools to get themselves into the Big 12 championship game. Even if they win the Big 12 title, a two-loss Big 12 team is very unlikely to get into the Playoff. So K-State needs to split the Oklahoma games, and the easier one is, or should be, the one at home.

After playing two of their easier games on the road (Kansas, Texas Tech), Kansas State closes the season with a tough stretch: vs. West Virginia, @ Oklahoma State and home against Iowa State. The Mountaineers and the Cowboys could certainly find themselves in Big 12 championship game contention at this point in the season, while Iowa State would love nothing more than to knock the Wildcats out of the conference championship game. Both the Iowa State and Kansas State fan bases get up for Farmageddon, and this year’s match up could have special meaning. Heck, it’s even possible Iowa State is playing for the right to get to 6-6 and make a bowl game for the first time in five years. So if you think the final game of the season is an easy win for the Wildcats, think again.