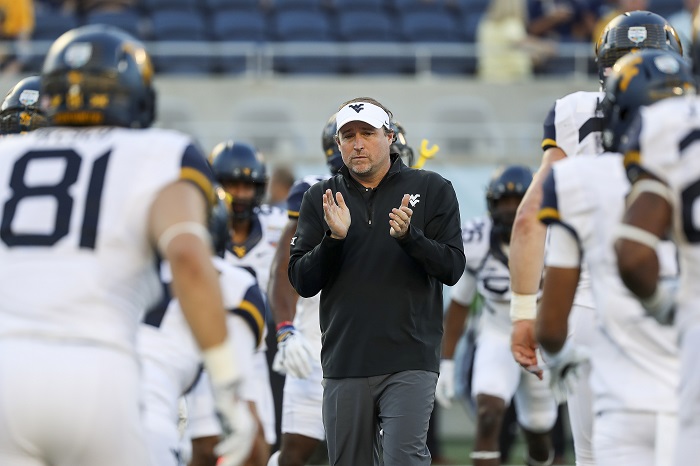 Let’s get to the West Virginia Mountaineers

It’s one of the biggest non-conference games in the Big 12 this year. West Virginia opens things up at FedEx Field against Virginia Tech. Justin Fuente’s team is many people’s favorite to win the ACC Coastal Division. If West Virginia, who is in the Top 25 in the AP Poll, but was picked to finish sixth in the Big 12 preseason poll, pulls off a win, it would be a great way to jump start the Big 12 season and the Mountaineers season. New quarterback Will Grier will get tested early on by a solid Virginia Tech defense. This game will be a great test for the Mountaineers and we will find out if this team is a legit Big 12 conference title contender or if last year’s 10-win season will start to feel like a one-hit wonder.

The first month of Big 12 play isn’t incredibly difficult, but the travel is. The Mountaineers play the following schedule to start conference action: @ Kansas, @ TCU, vs. Texas Tech @ Baylor. Now any kind of travel for West Virginia is difficult being in the Big 12, but this is especially harsh with three road games in four weeks, which obviously includes a back-to-back. The good news is that outside of TCU in Fort Worth, these should be three very winnable games for West Virginia to get the season rolling on a positive note. But still, 7,000 miles traveled (back and forth), over a three week span is no easy task.

Return the favor to Oklahoma State

Last season it was the Cowboys who ended West Virginia’s undefeated season (6-0 at the time) with a 37-20 win in Stillwater. Mason Rudolph had a day, throwing three touchdown passes and rushing for a score as well. Will Grier needs to avoid the mistakes that Skyler Howard made in this game last season when he threw two interceptions and lost a fumble. In fact, three times the Cowboys forced turnovers and gained possession inside the West Virginia 15-yard line, leading to 17 points. The good news is that this game is at home for the Mountaineers and is book ended by two games (Baylor, Iowa State) that should not have West Virginia losing any focus on the Pokes.

The back end of the Mountaineers schedule is absolutely brutal. They play at Kansas State, home against Texas, and wrap up the regular season on the road against Oklahoma. Considering the Mountaineers bye week comes Saturday September 30th, they better have something left in the tank for this final three-game stretch. With the Big 12 championship game being simply the top two teams in the conference, I believe that when we get to this part of the schedule, WVU, Kansas State, and Oklahoma will definitely still have conference championship game hopes. Texas could as well, but I’m not going to be bold enough to say I’m confident in that. West Virginia at Kansas State and West Virginia at Oklahoma could be the two games in the final three weeks that define the Big 12’s season. It’s going to be a fun.

I don’t see any way West Virginia goes 9-0 through the Big 12 schedule. If they get there with one loss, that would be a fantastic season. It’s possible they could get there with two losses, although I don’t think a Big 12 team with two losses has a prayer at making the College Football Playoff. If somehow, someway, the Mountaineers get to Dallas with one loss, they still have to win a Big 12 championship game to have a good chance at the Playoff.