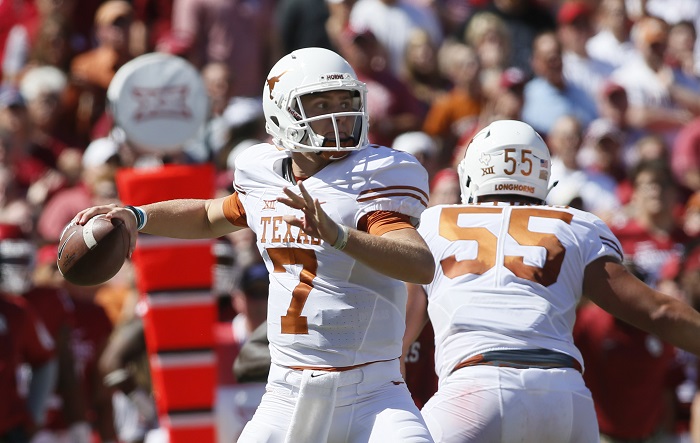 Let’s now move on to the Texas Longhorns

It’s the season opener and first game of the Tom Herman era in Austin. But the question remains, is this really the coach who is going to turn around a Texas program that hasn’t lived up to expectations in nearly a decade? Most people believe that answer is yes, as do I, but God forbid this season gets off to rocky start with an usually close game against Maryland, or even a loss, forget it. UT fans are going to be moaning and groaning by Labor Day. Crush the Terrapins, give the fan base some early optimism and get the ball rolling.

Going on the road against a top 5 team and a Heisman favorite is not easy, which is why the Longhorns do not necessarily need to win this game. But they can’t go to Southern California for a prime-time match up and get embarrassed by Sam Darnold and the Trojans. Just keep it competitive, meaning within 10 points, and the Longhorns can still have a special season. The committee does not want to see the Texas Longhorns looking incredibly over matched against what is presumed to be one of the country’s best teams. It would be a bad look for UT and a worse look for the Big 12 conference.

I don’t think you can find a more brutal three-game stretch for any team in the Big 12 than what Texas has in October: vs. Kansas State, against Oklahoma, vs. Oklahoma State. The good news none of them are true road games. Kansas State and Oklahoma State are in Austin and the Red River Rivalry is a neutral site game. Also, the Longhorns should be well rested. After the USC game, they have a bye week followed by a Thursday night game at Iowa State. So they’ll have one game over a 20-day stretch from late September to early October. Use that time wisely to stay fresh ahead of the hardest stretch of the season.

After the previously discussed three-game stretch, it’s two road games in the Lone Star State at Baylor and at TCU. There’s no game that TCU and Baylor get up for more than the Longhorns. Many of the kids from TCU and Baylor may not have had offers from UT and want nothing more than to beat the “flagship program” in the state. Nevermind if Texas is sitting mid-season looking like one of the best teams in the Big 12, if not the nation, the stakes will be raised even higher. Think Matt Rhule wouldn’t love to help get his Baylor Bears a staple victory in a season that may end up with a mediocre record? This game is always a big recruiting chip for coaches as well. Don’t get caught off guard, UT.

At the end of the season, if the Longhorns are still in the mix, the final three games ease up, sort of. They play home versus Kansas, at West Virginia, and home against Texas Tech. Kansas and Texas Tech should be fairly easy wins (insert your Kansas beat Texas jokes here). But winning in Morgantown is never easy, especially if the Mountaineers are as good as I believe they will be. The Mountaineers are 12-11 in home games against Big 12 teams since entering the conference in 2012. That sounds mediocre, but to put it in perspective, they are 7-1 in their last eight Big 12 home games. The travel, the fans, and the weather can get the best of any team going to West Virginia. The Texas Longhorns can’t start this game slow.