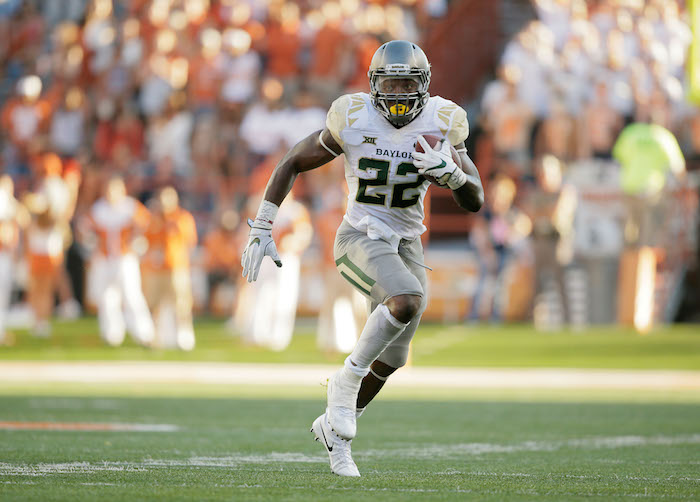 Here is everything you need to know about the Bears opener in our Baylor vs. Liberty Preview.

RB Carrington Mosley. With just 663 yards last season, Mosley should be the primary runner in the backfield this season.

DE Juwan Wells. A dangerous pass rusher coming off a 79-tackle, 5.5-sack season for the Flames.

QB Anu Solomon. The former Arizona quarterback — who once led the Wildcats to a Fiesta Bowl berth as a redshirt freshman — was named the starter earlier this week over holdover Zach Smith. He wasn’t able to hang onto the starting job in Arizona last year, and it’s unclear how much rope the Bears are willing to give Solomon, in terms of quality of play.

DE K.J. Smith. He returns as one of the Big 12’s most dangerous pass rushers, and he dominated against FCS opponent Northwestern State last year (three tackles, two TFLs, one sack and two QB hurries).

RB Terence Williams. The Bears have used a backfield-by-committee for years, but Williams has the size, strength and speed to be the dominant runner for the Bears this season.

LB Taylor Young. Undersized for a linebacker at just 5-foot-9 and 225 pounds, Young is coming off a 93-tackle season and is the leader of the team’s back seven on defense.

The Flames will play as an FCS independent making the transition to FBS, where it will start play in 2018. The athletic program is also run by former Baylor AD Ian McCaw, who resigned last year in the wake of Baylor’s off-field sexual assault scandal. The Flames are coming off a 6-5 2016, but reached the FCS playoffs as recently as 2014.

This will be Bears head coach Matt Rhule’s first game as Bears head coach and he’s already set a positive tone around the program. He made his biggest decision this week in giving the starting quarterback job to Anu Solomon. The correctness of that decision could set the early direction of this season. Baylor is hoping one of its several young wide receivers can step into a prominent role and defensive coordinator Phil Snow needs to turn the Bears into a defensive unit that plays consistently both inside and outside of Big 12 action.

Baylor 38, Liberty 14. The Bears have some issues to work out early this season, and the Flames should offer them the opportunity to take a good first step. Like last year’s easy win over Northwestern State, this looks like a happy meal game for the Bears.