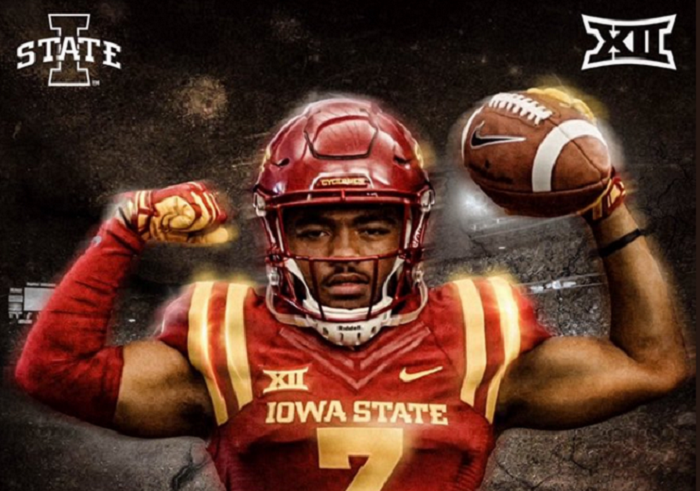 While the college football season typically lasts only a little over 4 months, there is one thing that never stops: recruiting.

This is the one aspect of the college football game that is 24/7, 365 days of the year. To simply put it, there is no offseason for recruiting (outside of a couple dead periods). A commitment can happen at any place or any time of the day. Recruiting has become almost bigger than the game itself sometimes and as social media continues to cross paths in recruiting, the fans get more involved as well.

Just like how the cowboys traveled on the old dusty trail, the recruiting trail can be just as bumpy and harsh (of course, depending on who you root for). It’s time to circle the wagons folks and grab a seat by the campfire because the Big 12 Recruiting Roundup is here. This is a place to check out how your team is doing on the recruiting trail as well as how they stack up against their conference foes. Whether you want to just check on your team or take a gander over at the competition, there is always room for you at the Recruiting Roundup. This will be a bi-monthly series covering the commitments from the beginning of the month to the 15th on our mid-month roundup and following it up by tracking the commitments from the 15th to the end of the month in our ending month roundup.

Texas stays hot on the trail, this time it is with 4 star OT Rafiti Ghirmai out of Frisco, TX. Rafiti shows his raw power on film and his ability to finish blocks with some authority. The first thing that jumps out to me is that he doesn’t stop until the whistle blows. Once he has you down, he will absolutely bury you in the dirt. This is the kind of attitude Texas needs to bring back the swag in Austin. The one area I would like to see some improvement is in his footwork. That should be cleaned up with the proper coaching once he steps on campus.

While there are some very good things on his film, I come away with more questions than anything. Delarrin is the best run-stuffing safety prospect I have seen on film compared to any other safety that is currently committed to a Big 12 school. He isn’t afraid to get his hands dirty and clock some running backs silly. I am not kidding when I say that he looks like a heat-seeking missile bursting in the backfield making plays. The question I need to know is how his coverage skills are. There was no film on him in actual coverage. If he can cover half as good as he can stuff the run then the Sooners have found a gem here.

There have been no commitments for the 2018 class in the past few weeks for the Horned Frogs. Be sure to check in again on the next Big 12 Recruiting Roundup to see if the Horned Frogs have anyone else on board.

There have been no commitments for the 2018 class in the past few weeks for the Bears. Be sure to check in again on the next Big 12 Recruiting Roundup to see if the Bears have anyone else on board.

There have been no commitments for the 2018 class in the past few weeks for the Cowboys. Be sure to check in again on the next Big 12 Recruiting Roundup to see if the Cowboys have anyone else on board.

It is easy to see that Stills is a man amongst boys in West Virginia high school football. He looks bigger, stronger and faster than anyone on the field at all times. He is an excellent run stuffer and has a knack for blowing up the offenses run game. You are not going to find many players like Dante in the country and he just so happens to be the #1 rated player in the state of West Virginia. Dante is a very complete player and he will be an excellent fit in Tony Gibson’s defense.

Texas Tech has found another excellent slot receiver in Sterling Galban. Sterling has soft hands and is very smart on the football field. He has a great sense of finding the soft spot in zone coverage and getting open. Sterling isn’t going to burn you with his speed or agility but his feel for the game isn’t necessarily something you can really teach. Can he be the next Wes Welker? Who knows, but this is a very interesting player Tech will be getting.

There have been no commitments for the 2018 class in the past few weeks for the Jayhawks. Be sure to check in again on the next Big 12 Recruiting Roundup to see if the Jayhawks have anyone else on board.

Iowa State is putting in some serious work getting a recruit from the state of California. Not just any player from California, but a very good one in Josh Madison. Josh is listed as an athlete, but he will play safety at the next level. As a safety, he shows that he can really bring the boom when he hits someone. He sees the field very well and is quick to make a play wherever the ball is. His physicality speaks for itself and that is not something you can coach. The Cyclones should be thrilled about landing this gem out of California. I had the chance to speak with the hard hitting safety Josh Madison about his commitment.

HCS: What made you decide to commit to Iowa State? What was the key factor that really sold you on their program?

Josh Madison: “They showed me more love than most colleges since day one. On my unofficial visit, they really made me feel at home. Coach Campbell and I sat down one on one and he really touched base. The hospitality in Ames is incredible.”

HCS: What are your thoughts about playing for a guy like Matt Campbell? What really stood out to you about him as a coach?

Josh Madison: “When I sat down and talked to him I could tell that he wasn’t just a head coach. I view him as a mentor and an overall great person. The thing that stood out about him is that you can tell he cares about his players.”

HCS: How excited are you about playing in Jack Trice Stadium on Saturdays?

Josh Madison: “I am beyond excited! I am really looking forward to my official visit.”

Not a whole lot of film to work with, but I will give it a shot. Jaquavius is a small explosive wide receiver. Almost every play on his film was him running a fade down the sidelines and catching the deep ball. He is very quick and shifty when carrying the football and I can see Kansas State throwing it to him in the screen game as well as letting him run those deep routes for the big play possibility.

At 6’4-227, John is a very big and strong quarterback. He is listed as a dual threat but he isn’t going to burn you with his wheels. Where he can do some serious damage is in the short yardage situations. Don’t get me wrong here, he is more than capable of taking of when he needs to but at his size he is more of a bruiser type of runner. He has some really nice touch on his deep passes to compliment his running ability. He fits the mold of a typical Kansas State quarterback and the Wildcats should be thrilled about John’s commitment. Kansas State has found its next starting quarterback for the future.