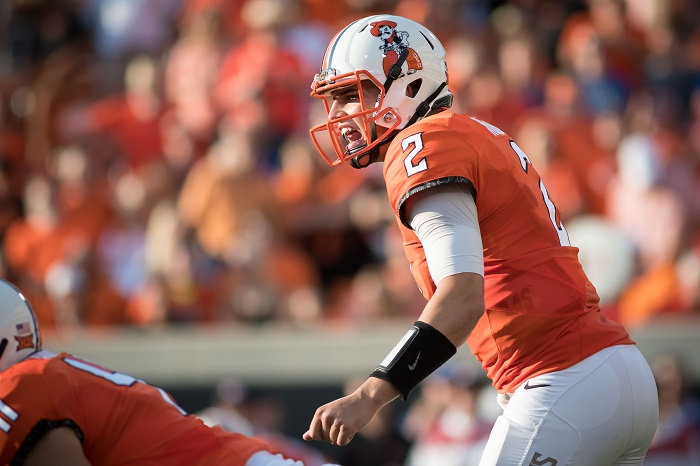 It all got started two minutes into the ball game. Mason Rudolph with a strike to LSU transfer Tyron Johnson for a 44-yard touchdown to get the scoring going early as Oklahoma State jumped out to a 6-0 lead over Tulsa. Just a few minutes later, it was a 40-yard touchdown to star James Washington. The expectations are high for this offense in Stillwater, and Rudolph got everything off to the right start on Thursday night.

It’s not a secret, and incase you were living under a rock this offseason, what you saw on Thursday night you will be seeing much more of this fall.

Rudolph finished his night a ridiculous 20-24 for for 303 yards with three passing touchdowns and one rushing touchdown.

Half of what is needed to win the Heisman Trophy is good timing and games placed on days and times when most people can watch you. Rudolph had that on Thursday night when there were only a handful of games, the other big one being Ohio State and Indiana. Buckeyes quarterback J.T. Barrett got off to a sluggish start in the first half, but put it together in the second half finishing with over 300 passing yards and three touchdowns. On Thursday night, Rudolph had the edge over Barrett.

Unlike the Ohio State QB, Mason Rudolph his production going right from the get go. It wasn’t Lamar Jackson against Charlotte in his opener last season when he threw for six touchdowns and ran for two more. But it was certainly more than good enough for Mason Rudolph to keep himself near the top of the discussion in Week 1.

Yes, it’s early. But once again, I’ll point to Jackson last season, who got off to a red-hot start, then actually struggled down the stretch, but Heisman voters were too lazy to look anywhere else at that point. Over his last three games of the season, Jackson threw 4 touchdowns to 3 interceptions and the Cardinals went 1-2. Not exactly Heisman worthy. But it worked. Getting off to a great start is much more beneficial than a mediocre start to the season and then closing strong.

The biggest problem for the Rudolph in his chase of college football’s most prestigious individual trophy: his teammates. Notably James Washington, who caught six passes for 145 yards, including two touchdown grabs of 77 and 40 yards. There is just so much talent that permeates this offense, it’s unbelievable.

Sure, Tulsa is young, but this was not an FCS program. It was a team that won 10 games last season in the AAC. And along with the passing game, the running game racked up 332 yards on the ground.

But offensive coordinator Mike Yurcich was not about to begin patting his guys on the back just yet, saying after the game, “By no means did we play a perfect game. We’re going to chase that perfect game and can’t turn the ball over. Just minor things that actually turn into big things. We have to make sure that we get better every day. I don’t think you can sit here and gloat about anything. You have to learn how to improve and that’s the process and that’s what it’s all about.”

59 points. 355 rushing yards. 308 passing yards. Yes, two fumbles. But, if that’s not close to a perfect game for this Cowboys offense, then watch out. This season can be just as special as many in Stillwater are hoping for.