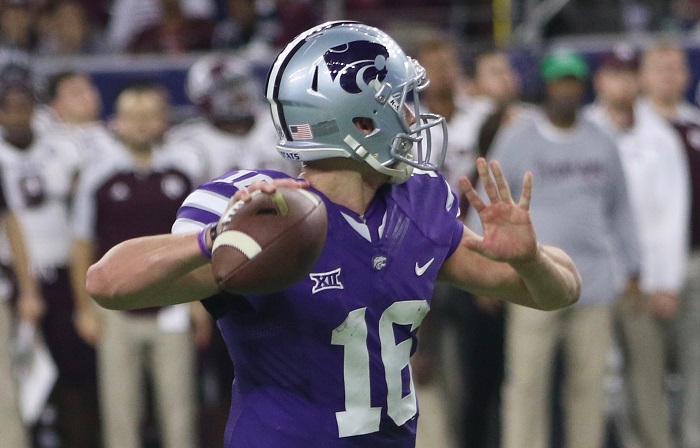 Yes there are those out there that think Kansas State can win the Big 12 conference this fall. I’m one of them. But I felt in the preseason they were the third-best team in the Big 12, behind the Oklahoma schools. That being said, if the performance by Jesse Ertz on Saturday was any indication, this could be the most complete team in the conference.

With Jesse Ertz’s injury history, the best way for the Wildcats to have the season they hoped for would be to use the quarterback a little less in the running game, while keeping defenses more honest through the air. The formula only worked if Ertz’s passing game was improved enough to actually scare defenses. Through one game, it appears it is.

While it was “only” Central Arkansas, it was a Bears program that is ranked in the Top 25 in FCS. Plus their secondary was the best unit on the team, with three players on the preseason all-conference team. Ertz went out there and torched the defense, with his arm. He finished 10 of 16 for 333 yards and four touchdowns through just three quarters of work in Kansas State 55-19 win over Central Arkansas.

Jesse Ertz also broke the school record for quarterback rating in a game: 319.8. Unreal. His head coach, Bill Snyder, said after the game, “Jesse really played well. There were two visible throws, maybe three that were truly off the mark. Outside of that I thought he threw it awfully well, and managed it well.”

With the game tied at 10 in the second quarter, Jesse Ertz threw a beautiful fade pass in the corner of the end zone to Isaiah Zuber. It had the kind of touch I don’t recall the quarterback having last season. At least not with that kind of confidence or consistency. It was a thing of beauty.

Coincidentally, it was the running game for the Wildcats that struggled, with Alex Barnes only rushing for 29 yards on 9 carries. Also Justin Silmon did not dress, with Snyder admitting after the game he was probably going to be out for a couple of games.

Sure, Snyder also ripped into his defense, which didn’t get much push up front, and allowed quarterback Hayden Hildebrand to rip off nearly 200 rushing yards. Snyder quipped, “Yeah, we’ll practice tonight at midnight on playing the option.”

Those are correctable mistakes that I don’t expect to be an issue for Snyder’s team as the season progresses. But if Jesse Ertz’s passing attack is really this improved, it can be that very special season Wildcats fans have waited for since 2012. Speaking of 2012, how much credit goes to Collin Klein, the former Kansas State signal caller, who is now back in Manhattan as the quarterbacks coach? I don’t know how to quantify that, but it can’t hurt. Klein famously helped lead the Wildcats to the No. 1 ranking in the country late in the 2012 season and finished third in the Heisman voting.

If Ertz can channel that kind of success through the air, the rest of the Big 12 should be very concerned.