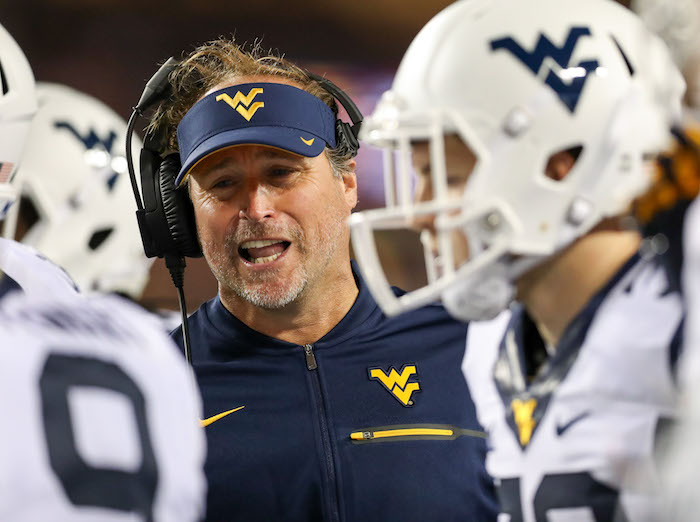 West Virginia head coach Dana Holgorsen made a point of telling the media in July that he felt his team was recruiting at a Big 12 level and the Mountaineers depth was right on par with the rest of the Big 12 conference. So, the natural question after the Mountaineers’ 31-24 loss to Virginia Tech was, “Where is it?”

Well, depth is a tricky thing. It’s one thing to have it. It’s another thing for it to be functional. And the latter is not the kind of depth the Mountaineers (0-1) have right now.

The Mountaineers had several players cramp up in the second half of Sunday’s loss. After the game, defensive coordinator Tony Gibson admitted that the Mountaineers played only 14 defenders the entire game. Linebackers like Al-Rasheed Benton played just about every snap. That was bound to take a toll as the Hokies ran up 469 yards in total offense, led by their young quarterback Josh Jackson, who accounted for 336 total yards, scoring one touchdown and throwing another. Holgorsen said the Mountaineers recruited Johnson, but failed to land him.

Plus, head coach Dana Holgorsen said after the game that the Mountaineers are lacking a “speed guy.” That is, someone that can really stretch the field on opposing defenses. Funny thing is, Gary Jennings Jr. looked plenty fast as he looked back and smiled at a Hokies defensive back as he scored a 60-yard touchdown pass in the fourth quarter, one that tied the game at 24.

“(We have guys) that can body people,” Holgorsen said. “In a game like this when it’s hot and everyone was cramping, there’s a fatigue factor that that’s why I’ve been complaining about backup receivers for a long time. We need more guys that can step up and stretch them.”

While none of them can “stretch” defenders, Jennings, David Sills V and Ka’Raun White combined for 26 receptions, 357 yards receiving and three touchdowns.

If you’re taking these Mountaineers as your Big 12 conference champion — and one of our HeartlandCollegeSports.com writers is doing just that — you’re taking them on potential. If you open the West Virginia game notes to page 17 you’ll find career starts by position. While the game notes make the point that 11 different offensive players have started at least one game, only two have started more than 10 games.

At least on defense there is at least a season’s worth of experience among four different defenders. But that’s about it.

West Virginia is a bundle of potential and it’s tantalizing to think of how high the Mountaineers can go once it starts clicking.

The Mountaineers racked up 592 yards in total offense led by a new quarterback, Will Grier, who hadn’t played in two years. You can see why Holgorsen and offensive coordinator Jake Spavital are so enamored with him. He picks things up quick and can handle a heavy load (he threw 53 passes Sunday for 371 yards and 3 touchdowns, while rushing for another 52). His timing was off with his receivers, but chemistry isn’t built in 7-on-7 and fall practice, at least not completely.

“I thought Will did a really great job of showing us he was a ball player,” Holgorsen said. “He didn’t panic.”

Running back Justin Crawford should have been used more. Just 13 carries, albeit for 106 yards, seems criminal for a back of his talent. Holgorsen said the plan was to throw plenty because the Hokies were coming off a season as a Top 10 run defense. Many of those pieces returned for the Hokies, and the Mountaineers rushed for 221 yards as a team, about 100 yards more than the Hokies gave up, on average, a year ago.

That’s an encouraging sign for a team which runs best when Crawford fuels it.

The defense made mistakes, and some of them were glaring. The pass interference call in the fourth quarter on Mountaineers defensive back Elijah Battle was inexcusable. I was about 20 feet away from it. There was no doubt it was pass interference. Battle pushed Virginia Tech wide receiver Cam Phillips out of the field of play before the ball even arrived. Mountaineers fans weren’t pleased. The Hokies scored the game-winner on that drive.

But the Mountaineers also stopped the Hokies often, forcing eight Virginia Tech punts. In reality, the Mountaineers played good defense in the first half, but their thin functional depth on defense wore them down in the second. That’s the piece that doesn’t bode well for Big 12 play. Virginia Tech ran no huddle, but weren’t that interested in pushing the pace. Teams like Oklahoma and Oklahoma State will have no problem pushing the pace, and if the Mountaineers’ defensive depth doesn’t catch up soon that gap may be too much to overcome.

Even Holgorsen has some kinks to work out. During Big 12 Media Days he joked about the new sideline rules, which strictly keep the head coach and his assistants in the coaches’ box. Holgorsen joked he’d have some adjusting to do. Well, that’s still the case. He was called for unsportsmanlike conduct on Sunday for leaving the box.

“I got too far out. I didn’t say anything,” Holgorsen said. “I just looked at him in an inappropriate manner and he threw the flag.”

The Mountaineers hoped to make a statement Sunday night. They were playing a national-televised game as a Top 25 team against another Top 25 team in Virginia Tech that won the ACC Atlantic Division last year. The Hokies were no slouch. It was an opportunity for the Mountaineers to not only show they belonged in the Big 12 race, but also in the national picture.

The Mountaineers are still Big 12 contenders. Losing this game did nothing to hurt their opportunity to win the conference. The pieces are there, but will the depth grow up in time?

“We have to come back and use this as motivation,” safety Kyzir White said. “No one was giving up and hanging their head out there. That’s something we can learn from.”

The Mountaineers have a little time to figure it out. Just a little.