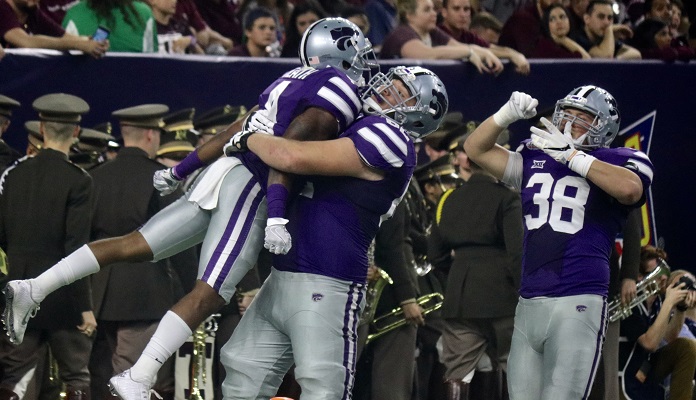 Here is everything you need to know about the Wildcats game on Saturday in our Kansas State vs. Charlotte preview.

After setting the Kansas State record for Total QBR and being the most efficient passer in the NCAA in Week 1, Bill Snyder said about his quarterback, “I can’t think of a segment of his game that hasn’t improved. … I see improvement virtually everywhere.” Well, let’s see if Ertz can keep that going. If you recall, Charlotte is the team Lamar Jackson got his Heisman season kickstarted against last year when the Cardinals put up 70 points. Who knows what Ertz will pull off on Saturday.

Barnes got his season off to a slow start with just 9 carries for 29 yards against Central Arkansas. Ertz had seven carries on the day. With Justin Silmon out, I’d like to see Barnes get the bulk of the work and put Ertz in less danger with the running game. Barnes ranked first among returning returning running backs in terms of elusive rating. This would be the game to begin that.

He’s the 49ers dual-threat QB who threw for over 100 yards and rushed for over 100 yards in last week’s loss to Eastern Michigan. But Klugh struggled with consistency last week and his pick six started the scoring for EMU who went on to a 24-7 win. Still, he’s the clear leader of this offense and the North Carolina A&T transfer accounted for 15 touchdowns in the final seven games last season.

Ford is the team’s top returning receiver with over 400 yards last season. He’s expected to be the top target for Klugh this season and one of the better wideouts in Conference USA. But last week he had just two catches 20 yards. Life won’t be easy for Ford against this Kansas State secondary.

Keys to the game

If there was anything to critique the Wildcats for it was their run defense, which gave up over 220 yards to Central Arkansas. Last season the Wildcats ranked 11th in the country allowing just 115 rushing yards per game. What happened on Saturday can’t be a trend that continues, especially against a team like Charlotte.

Kansas State had six receivers with a catch last week and no receiver had more than three grabs (Pringle, Harris). With Ertz continuing to improve and impress in the passing game, if the Wildcats can show they have several weapons at wide receiver at their disposal, this offense becomes even more lethal.

There really isn’t much to this. Charlotte stinks. They are picked to finish at the bottom of their division in Conference USA. Kansas State just needs to go out there and get this one over with as quickly as possible to save energy for a tougher road test against Vanderbilt the following week.

The Wildcats are going to take care of business with ease for a second-straight week. It’s only a matter of by how much. Sure it’s ahead of an SEC opponent, but this is in no way a trap game. The talent level isn’t close on the respective sidelines. Kansas State will have this game completed by the third quarter and will begin resting starters in anticipation of a road game in Nashville against Vanderbilt.