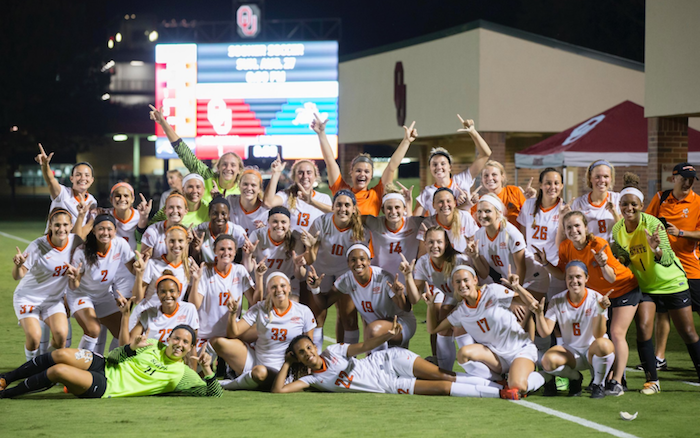 A new feature on Heartland College Sports called, “Away from the Gridiron” takes a look at some of the non-revenue sports and all the latest happenings across the Big 12 conference.

*Rankings from the United Soccer Coaches, former known as the NSCAA

–Texas enters the rankings at No.21 this week. They are one spot ahead of rival Texas A&M.

–West Virginia drops down two spots, despite claiming one a first place vote.

–Kansas dropped out of the rankings from No.19.

–Jaci Jones (Oklahoma State) and Ryan Williams (TCU) are tied at ninth in the nation with five assists.

–Allison Ganter (TCU) has 15 points. This places her in a six-way tie for ninth in the nation. Players receive two points for goals and one point for an assist.

-As a team, Oklahoma State is ranked in the top 10 nationally in total goals, total assists and total points.

–Oklahoma State is tied for seventh nationally in goals per game at 3.33

–Katie Glenn (Texas) is the Big 12 Offensive Player of the Week. Glenn scored two goals and one assist this weekend. She scored the first goal during a 3-0 upset of previously ranked Colorado.

–Brookelyn Entz is the Big 12 Freshman of the Week. This is the second year Kansas State has fielded a soccer team, and the first year it has played as a member of the Big 12 Conference. Naturally, Entz is the first ever Kansas State player to garner Big 12 Freshman of the Week. She earned it by becoming the first player in program history to score two goals in one match, which took place during a 3-1 victory against Central Arkansas.

() Rankings from the AVCA Coaches Poll

*Oklahoma State does not sponsor volleyball

–Texas dropped down one spot.

–Madison Rigdon (Kansas) is the third consecutive Jayhawk to earn Big 12 Offensive Player of the Week honors. She became the 16th Jayhawk to reach 1,000 career kills. Aside from the milestone, Rigdon recorded three double-doubles.

–Alexis Conaway (Iowa State) is the Big 12 Defensive Player of the Week. This is the second time she has received the honor in her career. Iowa State scored a victory in the Cy-Hawk Series Friday. During the match, Conaway notched eight blocks.

-Freshman Lexi Sun (Texas) is the Big 12 Freshman of the Week for the second consecutive week. Sun’s stats during the American Campus Classic Tournament this past week: 43 kills, .330 hitting percentage, 2 aces, 24 digs, 7 blocks.

RV Texas (was previously No.30)

No.20 Oklahoma State (up one spot)