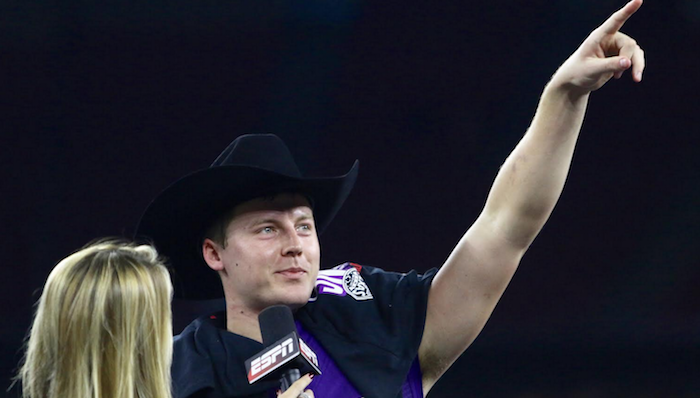 For the second-straight week we get another Big 12 – SEC match up, where the Big 12 team is favored. Last week, TCU smacked around Arkansas 28-7. Next up: Kansas State hits the road to take on Vanderbilt in Nashville. Despite the Wildcats being the favorite, typical SEC douchebaggery never ceases to amaze me.

Vanderbilt safety Ryan White said about their game against Kansas State, “We play in the SEC, so we play the best every week. We’re just looking at it as another game that we’re trying to go 1-0.”

Well, as Tyler Dreiling pointed out (although using the wrong first name), the Wildcats have played more ranked teams than Vanderbilt in recent years.

Vanderbilt’s Kevin White: “We play in the SEC, so we play the best every week.”

Leave it to the SEC to continue to live in a fantasy world, or just still living circa 2008-2012, when they actually were a dominant conference, instead of reality.

Here are the full comments from Ryan White, which begin around the :50 second mark.

As if Bill Snyder’s guys, who always have a permanent chip on their shoulders, needed something else to get motivated by, here you go. The Big 12 is still getting disrespected, even though the conference has the best win in college football through the first two weeks of the season (Oklahoma over Ohio State).

I’d love to see Kansas State roll into Nashville and stick it to the Commodores in front of their home fans. Now, THAT would be sweet. And Ryan White would realize that this isn’t just “another game”.

This also seems like a good time to remind you of these shirts we recently created, “OVERRATED” with the SEC logo as the “O”. They’ve been pretty popular so far. To order one for $17.99 just click here!

Away from the Gridiron: Big 12 women’s soccer, volleyball and cross country
Kansas State at Vanderbilt Preview and Prediction
To Top