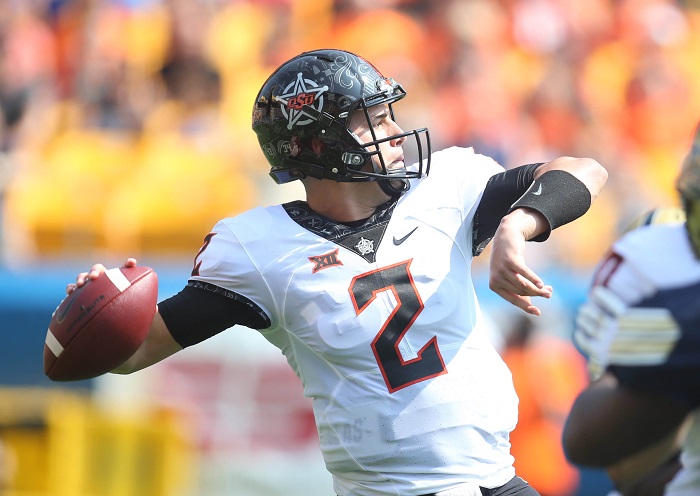 Tulsa and South Alabama were one thing. Pittsburgh, a team that took the Pokes down to the wire last season in Stillwater, is another. Oklahoma State blew out Pitt 59-21, but the game was much uglier than the final score indicated.

The Cowboys scored a touchdown on each of their first seven possessions. The Pokes racked up 516 yards in the process, a school record for most yards in one half.

But Mason Rudolph, who was pulled in the third quarter and finished his afternoon 23/32 for 497 yards, with five touchdowns to one interception, was able to spread the wealth. As was noted before the season, Oklahoma State’s wide receiver depth was going to be its biggest strength. So far, that’s proving to be the case.

Also, Marcell Ateman and Dillon Stoner also caught four and fives passes, respectively, for more than 100 yards each. It marked the first time in 12 years a team has had four 100-yard receivers in the same game.

“Pretty much everything we wanted was open … especially Jalen,” Rudolph said. “He just had the middle of the field on lock down.”

Well, when you have a wide receiver corps that goes 7+ deep, that’s the beauty of it. Last season James Washington had 296 receiving yards against Pitt. The Panthers made a conscious effort early to try and stop Washington, but all that did was open the door for a plethora of other talented, but lesser known, wide receivers.

If Rudolph turns out to be the “Peyton Manning or the Tom Brady” of college football, then forget it if you’re a fan of another Big 12 team. The Pokes will find themselves in the College Football Playoff and Rudolph will be waltzing down the red carpet in midtown Manhattan in December for the Heisman Trophy.

As it stands now, three weeks into the season, Oklahoma State and Oklahoma are the only Big 12 teams with a chance at the College Football Playoff. Kansas State’s loss to Vanderbilt hurts, West Virginia has a loss to Virginia Tech, TCU has an argument, but the rest,  well, just forget it.

But the Oklahoma State defense hasn’t been too shabby either. The Cowboys picked off Ben Dinucci twice, and have now forced a turnover in 17 straight games and in 26 of their last 27 games.

On the other side, Rudolph also set a school record for consecutive pass attempts without an interception. He entered the game with 185 and added 31 today before an interception in the third quarter to set the new school mark at 216. Brandon Weeden had the previous record of 194 set in 2011.

Speaking of 2011, Oklahoma State was second in the nation in turnover margin per game that season (+1.6, behind only LSU).  I’ll forever maintain the Pokes should have competed for, and I believe would have won, the national championship.

The formula and parallels to 2011 have been building since last season ended, but the way this team is winning is continuing to make those comparisons look legitimate.

But heck, if this current pace continues for the Cowboys, fans may very well end up forgetting about the 2011 season, with 2017 becoming the new gold standard for Oklahoma State football.