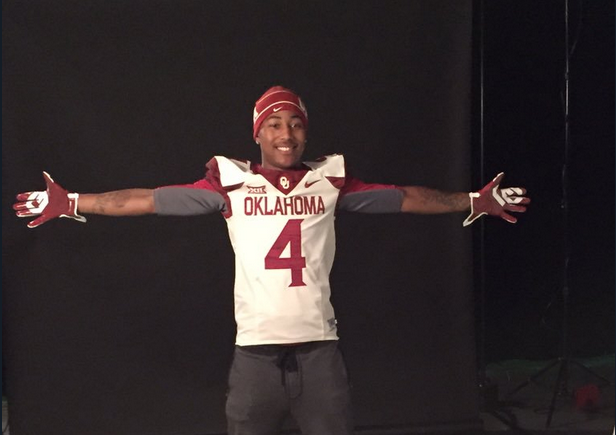 It’s likely that unless you’re a Sooners fan, the only Oklahoma game you may have spent time watching so far this season is their prime time match up at Ohio State. But with Big 12 conference play right around the corner, cornerback Parnell Motley is a playmaker fans across the Heartland are going to get to know very quickly.

While OU would’ve eventually figured it out against Tulane on Saturday, it was Motley who put a stop to the bleeding early on. The Green Wave had already scored on their first two possessions and was on their way to another one when Motley stepped in front of Jonathan Brantley‘s pass, picked him off, and took it back 77 yards to the house for the first pick-six of the cornerback’s college career. The score put the Sooners in front for good as they rolled to the 56-14 win in Norman.

After the win, defensive coordinator Mike Stoops said, “You see the results of another playmaker on the field. You have to have playmakers and dynamic players. Everyone can’t be perfect all the time. Some guys have to make plays and Parnell’s a playmaker.”

For Motley, it was his second interception in as many games, as he had a huge interception against Ohio State in the Horseshoe last weekend. The Buckeyes were trying to mount a comeback down 24-13 and there was still time for Ohio State with just a couple minutes gone by in the fourth quarter. J.T. Barrett was forced into a throw off his back foot and Motley stepped right in front for the interception to help Oklahoma seal the win.

Do you believe in magic? Parnell Motley picks off Barrett. #Sooners pic.twitter.com/1SkYEPS80H

Motley made eight tackles on the evening and it was, by far, the break-out performance of his early career. Also, it came at the perfect moment. The Sooners lost veteran defensive back Jordan Parker to a season-ending knee injury in the season opener and concerned mounted that Barrett might light up OU’s secondary and pick on Motley. But that turned out to be anything but the case last Saturday night.

I was admittedly concerned how Motley would handle the role as the underclassman in a secondary full of veterans (Jordan Thomas, Steven Parker, Khalil Haughton). I believed he might get exposed as opposing offenses pick on him. Instead, Motley has gone out and made the most of his opportunity.

Coming out of a high school, Parnell Motley was far from a can’t-miss recruit. He was generally considered a three-star prospect coming out of H.D. Woodson in Washington D.C.. Motley did hold major offers from Clemson, LSU, Miami and Michigan, but was not believed to be a crowning jewel of the Sooners’ 2016 recruiting class.

But the cornerback got a taste of playing time his freshman season, mostly on special teams. Also, he played some on defense as the season progressed, finishing with nine tackles in 11 games played.

Motley’s interception on Saturday seemed to kick start an Oklahoma defense that had gotten off to a slow start. Tulane racked up 184 rushing yards and 224 total yards in the first half. But after halftime, the Green Wave only had 8 yards in the third quarter and 67 total yards in the second half.

If this is a sign of things to come, Motley won’t just be kick starting the Sooners defense when needed, he will be kick starting his way to becoming one of the best cornerbacks in the Big 12 conference in the months and years to come.