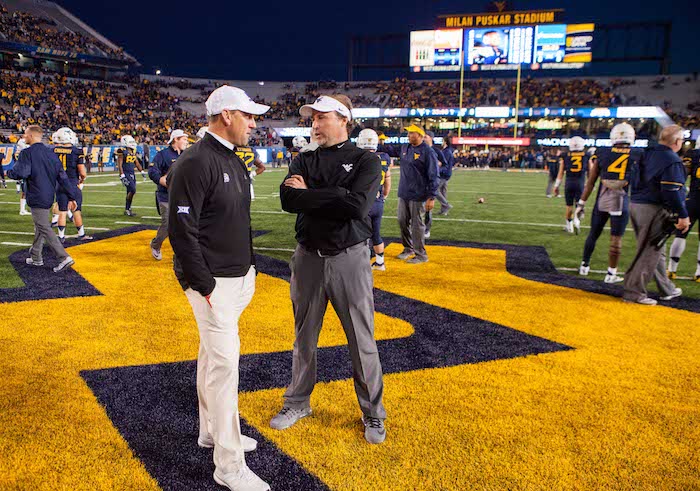 In a new feature this season, here is the best quote of the week from every Big 12 coach from the weekly Monday morning teleconference that the media participates in. The order will be based on the order that the coaches speak in, no other rhyme or reason. I’ll give a little reaction to those comments below each quote.

“Our guys are working really hard to get that thing [secondary] solved and fixed, and we’ve got to do it quick.”

Um, yea. After getting smoked for 90 points by a pair of MAC teams, that may be the understatement of the season for David Beaty. Will Grier comes to town this week followed by Kliff Kingsbury’s high-powered Red Raiders. When Beaty says “quick”, he meant, “yesterday.”

Riley on whether or not he will settle on a 1-2 running back punch or continue with a four-man rotation: “I don’t know yet. We’re going to let it happen. We’re still learning more about those guys. They’re all performing well. We’ve had different guys step up in different games… we’ll see. It will depending on their development and how they go and it will depend on our health.”

Riley has mixed it up in the backfield between Abdul Adams, Trey Sermon, Marcelias Sutton and Rodney Anderson. As long as they are all comfortable in their respective roles, and no one is really breaking away from the pack, then why not just keep rolling with all four? If it ain’t broke, don’t fix it. Ride the hot hand.

“It’s really difficult to think beyond trying to get past TCU … we just never go beyond the next game.”

Gundy is doing everything he can to avoid answering questions about the long-term goals of this team throughout the season. They have played so incredibly well thus far, he wants to avoid the notion that November 4th (Bedlam) and the Big 12 championship game are all that matters. He knows as well as anyone (Iowa State, 2011), that if you take your foot off the pedal for a split second, a team can pick you off. It’s a wise move by Gundy.

“I think it affects him [Jesse Ertz], but probably in the right way.”

Snyder believes their loss to Vanderbilt in Week 2 will motivate Jesse Ertz and help him improve. That’s great, because Ertz had a rough night on Saturday in Nashville. But the playcalling didn’t help his cause, as Ertz was asked to carry far too much of the load.

Classic Dana Holgorsen. He was asked if allowing 20 points is now considered good defense. Brilliant answer. Holgorsen has even more time to brush up on his jokes this week since his team gets to play the Jayhawks.

“I think the attitude and effort, last week, the team got hot and made a lot of great plays. Sure we allowed more points than we would have liked but when the game was on the line I saw guys step up and make some big plays and that was big for us.”

Kingsbury was asked about his defense improving and he believes it is. Granted, it’s been one of the worst defense in the country the past couple of seasons, so the word “improving” is vey relative. Still, you take the small, and big, victories when they are there. This team is 2-0 right now. They beat Houston and the odds of making a bowl game increase drastically, which likely saves his job for another season.

“They’re an outstanding team. His [Baker Mayfield’s] ability to create, to move, to make things happen, I’ve seen it on TV and now that you see it on tape, it’s unreal.”

Rhule has his Bears sitting at 0-3 and knows his hands are full as they get ready for the Sooners this weekend. Baylor did make some strides in their loss against Duke over the weekend,  but their slate of Liberty, UTSA and Duke is nothing compared to what’s to come Saturday. Get your popcorn ready.

“Getting that group [defense] to play at optimum capacity in critical situations.”

Campbell is basically saying in a fancy way, “We aren’t very good defensively yet, and need to improve.” The good news is he has 12 days between games to help improve that side of the ball before the Longhorns come to town.

“I’ve been excited about him [Kenny Hill]. i think the biggest thing is, some quarterbacks judge everything by yardage. What Kenny is learning here is we are trying to do whatever we need to do to win ballgames.”

Kenny Hill is no longer looking at the box score after games or trying to impress in them during games. That’s a big, big win for this TCU team, if that continues the rest of this season. If Hill tries to go blow-for-blow with Mason Rudolph this weekend, TCU will lose by three scores. Hill needs to play within himself as he has been so far this season.

“Shane [Buechele] will jump back in there with the 1’s, but Sam [Ehlinger] will get his share with the 1’s as well and we will see how close to 100% Shane is and go from there.”

Tom Herman has a situation on his hands as he tries to figure out what to do with his quarterback situation. Had Ehlinger won the game on Saturday night, there would be a ton of pressure for Herman to ride with the freshman. In a weird way, right or wrong, the loss actually gives him an easier time going back to Buechele, if he thinks that’s best for this team. Another interesting tidbit from Herman was that he did not consider going for a two-point conversation in overtime, as they used their two-point conversion play to score the touchdown, so they would have been scrambling.

Oklahoma State embarrassment of riches on display in Pittsburgh
Why is College GameDay avoiding the Big 12 conference?
To Top