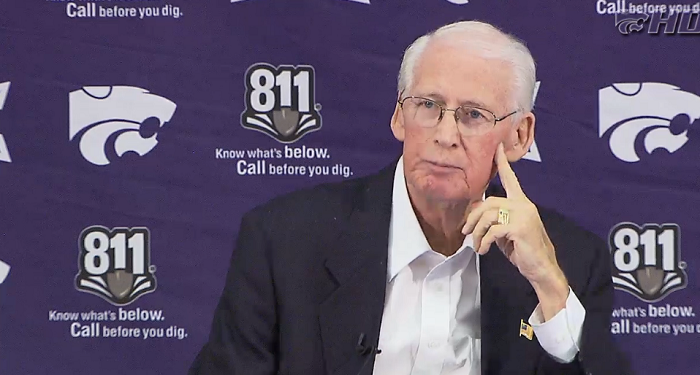 There are several things that went wrong for the Kansas State Wildcats in last week’s lost at Vanderbilt. But one thing that K-State should not have had trouble with was the officiating. Unfortunately, there was a problem, a big problem, and Bill Snyder wants answers, according to the Wichita Eagle.

In the second quarter of Saturday night’s match up, safety Kendall Adams picked up a fumble from Vandy and took it in for a touchdown. Wildcats defensive tackle Will Geary was the one who appeared to cause Vanderbilt quarterback Kyle Shurmur to fumble. But, after video review the play was overturned, as debate continued as to whether or not Shurmur’s knee was down.  Head coach Bill Snyder remains unclear on why officials changed the result of the play after a video review.

Snyder told local media in a teleconference on Tuesday, “My understanding about replays is there has to be a clear cut purpose for overturning a call that is made on the field. From my vantage point, strictly mine, I could not see that on video tape.”

But Snyder isn’t alone. Most who watched the replay agreed there wasn’t enough evidence to overturn the call, including the crew calling the game for ESPN.

Here’s the sketchy part: Big 12 officials ruled it a touchdown, but when it went to review, it was turned over to SEC replay officials located in Birmingham, Alabama.

As ESPN color analyst John Congemi said after the call was reversed, “That’s a shocker to me. I didn’t see a picture where you have indisputable video evidence to reverse that call.”

Of course making this even more painful is that the Wildcats lost by a touchdown, 14-7. Kellis Robinett added that Snyder said Kansas State received no explanation from the Big 12 and that the conference has reached out to the SEC looking for clarity. But the head coach has yet to hear from either the SEC or the Big 12 on the matter.