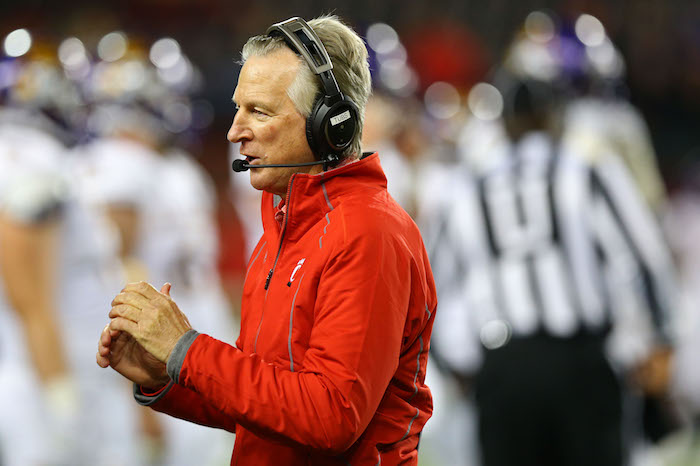 Many may see irony that Tommy Tuberville is going to be the color commentator for Texas Tech’s road game against Houston this Saturday.

For Texas Tech fans, there is no irony. The Lubbock faithful know this isn’t coincidence. Anyone who has followed Texas Tech for the past decade understands this is yet another power move the Disney-owned network is playing to further diminish the university and its athletic program.

Many fan bases claim all sorts of biases from broadcasters every game. Sure, Tech fans may spout off the same non-sense regarding Fox broadcasters. Heck, when Seneca Wallace ran all over the Tech defense, it sure did sound like TBS had a press box filled with Iowa State fans. Granted, Wallace put on a display, and Iowa State deserved the recognition.

ESPN, however, has a past with Texas Tech. The folks up in Bristol do not hide their bias at all. Every Big 12 fan knows what took place this week. If you haven’t read about ESPN spurning TCU and Oklahoma State to send College Gameday to Times Square, well here you go.

Let’s take a look at three prime examples of ESPN sticking its nose where it shouldn’t.

First off, ESPN color commentator Leland Maddox publicly out himself as a Miami Hurricanes fan during the 2014 NCAA Baseball Regionals. This came during the Hurricanes game against Texas Tech on ESPN3 during the Coral Gables Regional. Texas Tech ended up winning that regional, and advancing to the College World Series.

The bias against Texas Tech goes back to Mike Leach’s firing. ESPN had a major hand in the firing of the most successful coach in Tech history. Craig James was one of the network’s most visual color analysts. His son, Adam, was a player on Texas Tech. Leach was fired for insubordination after allegations of abusing the younger James. Adam said in court that the events which took place were funny to him, and didn’t think Leach deserved to be fired. Craig, however, was out for blood. He received his wish while being in cahoots with then-Texas Tech Chancellor Kent Hance. Meanwhile, ESPN stood behind Craig James and Hance. Leach sued Texas Tech University, ESPN, Craig James and a public relations firm James hired. While Leach lost the suits, the evidence has clearly shown he was set up after Hance lost contract negotiations in early 2009.

Shortly after Tech won the 2010 Valero Alamo Bowl with interim head coach Ruffin McNeill, the university decided to get rid of much of Leach’s staff. It hired a desperate Tommy Tuberville, who publicly advocated his interest in the job. Tuberville’s tenure at Texas Tech was a disaster. Tuberville’s best season saw an 8-5 record and a TicketCity Bowl victory over Northwestern. This came during his first season and with much of Leach’s recruited players. The former Auburn coach brought the program its first losing season in two decades. He made excuses for the losses, and once blamed the Lubbock winds for his offense’s problems.

As if the on-field problems weren’t enough, Tuberville’s off-field issues made Leach look like a saint. He abused graduate assistant Kevin Oliver on the sideline in front of a national television audience when he ripped off the headset emphatically and started screaming in his face. Two days later, Tuberville apologized.

Perhaps, the worst of his tumultuous tenure at Texas Tech was also what many Tech fans are extremely thankful for: his departure. Tuberville’s nickname quickly changed from “Pine Box Tommy” to “To-Go Box Tommy” after he left three recruits at the 50-Yard Line Steakhouse. Just hours later, Tuberville was being introduced as the new head coach of the Cincinnati Bearcats.

After he resigned from his post at Cincinnati, Tuberville was considering a run for Governor of Alabama. He eventually decided against the idea. However, he couldn’t help but take a shot at the City of Lubbock while being a guest on a radio show based in Alabama.

“You run me off at Auburn and you ship me to Lubbock, Texas,” Tuberville told the Rick & Bubba Show. “I’m going to tell you what, that’s like going to Siberia. Somebody asked me, ‘What’s Lubbock look like?’ It looked like Iraq.”

First off, he was hardly “shipped” to Lubbock. He practically begged for the job. Now, Tuberville will have to meet with Texas Tech head coach Kliff Kingsbury, who asked Athletic Director Kirby Hocutt to “Schedule Cincinnati” during his introductory press conference weeks after Tuberville provided the vacancy.

It’s clear to every Big 12 fan that ESPN is biased against the conference. After all, they have had a stake in the SEC for a while now with its network. They also have a stake in the ACC now by owning its new network.

Without question, if there is one school ESPN has proven its bias against, it’s Texas Tech. It’s one thing to make attempt to hide it. The fact Tuberville will be in the broadcast booth is a blatant move by the network.

Now the question is, what can Tech fans do to boycott ESPN? The best move is to tune into the game the old-fashioned way: on the radio. Learfield Sports presents the Texas Tech Sports Network featuring play-by-play voice Brian Jensen, color analyst John Harris and sideline reporter Chris Level. All of these men have been covering Texas Tech football for well over a decade. Jensen’s voice is synonymous with some of the program’s most historic moments including Crabtree’s catch to beat Texas in 2008 and Wes Welker’s punt return for a touchdown against Texas A&M in 2002. The other idea for those who need the visual aspect: go to a bar. If you want to send a message to ESPN, don’t give them the ratings.